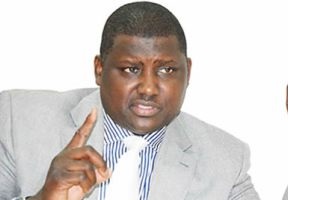 At the resumed hearing, Abubakar, urged the court to make an order for Maina’s remand in correctional centre having been produced in court after jumping bail.

He said Maina was produced in court following the court order for his bail revocation and issuance of bench warrant for his arrest.

“I want to inform the court that the 1st defendant (Maina) is in court pursuant to the bench warrant issued by the honourable court on Nov. 18 for his production in court.

“The bench warrant was executed and we apply to the court to issue an order to remand the defendant (Maina) in prison custody,” he said.

Adaji, who appealed to the court not to grant Abubakar’s request, said he would have filed a process in response to his application “but the exigency of time will not allow us to do that.”

Earlier, Abubakar told the court that the matter was slated for continuation of evidence-in-chief of the ninth prosecution witness.

But Adaji prayed the court for an adjournment, informing that he had just been briefed “about the matter this morning.

“We will be applying for a short date to enable us prepare.”

The anti-graft agency’s lawyer objected to the application for an adjournment.

He said such plea contravened Section 349(3) of Administration of Criminal Justice Act (ACJA) 2015 because Maina had already engaged a counsel.

He urged the court to allow the witness continue with her evidence-in-chief and that Maina’s new counsel could then sought for adjournment for cross examination if he so wished in the overall interest of justice.

But Adaji, who opposed Abubakar’s submission, insisted that he needed more time to study the proof of evidence in the interest of justice.

Ruling, Justice Abang recalled that Maina’s bail was revoked on Nov. 18 because he jumped bail and the court ordered a bench warrant for his arrest and that the trial should continue in his absence.

Abang acknowledged that Maina who was now in court, was still presumed to be innocent until contrary is proved.

The judge held that Maina was still entitled to all the constitutional rights under relevant section of the country’s 1999 Constitution, especially with regard to fair hearing.

Justice Abang, who granted Maina’s counsel prayer for an adjournment in order to be properly briefed, said the decision was in overall interest of justice.

Abang also upheld Adaji’s argument to adjourn the continuation of evidence-in-chief of the ninth prosecution witness to allow Maina briefed his lawyer properly.

He said the decision was in accordance with Section 349(3) of ACJA.

He, therefore, ordered that Maina should be remanded in a correctional centre pending conclusion of trial.

The judge, who did not specifically named a particular prison where Maina shouls be remanded, adjourned the matter until Dec. 8 for trial continuation.

Shortly after commencement of sitting, Francis Oronsaye, who had been appearing as Maina’s lawyer, told the court that he filed a notice of withdrawal of legal representation for Maina dated Nov. 24 and filed Nov. 25.

Oronsanye, who works at the law office of Joe Gadzama and Co., said their decision not to appear in court for Maina lately was not borne out of their disrespect for court.

“Our non-appearance before the court in the last sitting was not born out of disregard to court.

“We have written to the 1st defendant indicating our intention to pull out of representation and we went further to file a notice of withdrawal of appearance,” he said.

He said the statutory provision to take such action was three days before hearing, which they had fulfilled.

“We hold this court in high esteem and we have complied with the statutory requirement of three days.

“We adopt the said notice of withdrawal formally,” he said.

Abubakar, who confirmed the service of the application, did not oppose Oronsaye’s motion.

Justice Abang then granted the application in accordance with Section 349(7) of Administration of Criminal Justice Act (ACJA) 2015.

The EFCC had, on Friday, produced Maina in court after his extradition to Nigeria from the Republic of Niger.

Maina, who is being prosecuted by the EFCC on N2 billion money laundering charges, had jumped bail and fled to the country.

Maina last attended court in July and had subsequently missed up to six court sessions since Sept. 29.

Besides, his surety, Sen. Ali Ndume, was imprisoned by the court for his inability to produce him in court but later granted him bail after spending five days in detention.