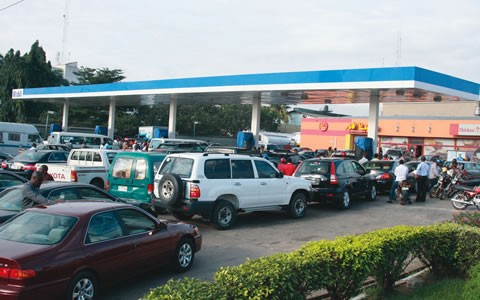 In spite of the promise made last week by the Minister of State for Petroleum, Mr. Ibe Kachikwu that the long queues at the filling stations will cease this week,  in Lagos metropolis and some cities across the country, the scarcity grinds harder.

Our Correspondents who moved around Lagos reported that the lifting and delivery of PMS to marketing outlets, seemed taking good shape, compared to the past, still, the product is still not readily available, a situation that resulted to long queues; traffic in and around the gas stations selling to the anxious customers.

As at Thursday morning, no single gas station selling fuel from Ojokoro, through to Abule Egba up till Agege motor road, specifically within Agege local Council area of Lagos state.

However, residents confirmed to AFRICAN EXAMINER that some gas stations, including NNPC were dispensing fuel to customers Thursday morning in Alakuko area, Ifako Ijaiye local council area as well as some independent outlets at the Lagos/Ogun toll gate, up till Sango.

Similarly, a major outlet at Fagba side and NNPC around jungle, both on Iju road, also in Ifako Ijaiye, sold fuel Thursday morning. The two outlets were besieged by the customers who joined a very long queue with the hope of buying the product.

At the jungle NNPC outlet, AFRICAN EXAMINER sighted some policemen stationed there, apparently to maintain law and order as well as enforcing strict compliance to authority’s directives by the attendants.

Similarly, AFRICAN EXAMINER gathered that few gas stations are selling fuel on Oba Akran and Agidingbi roads in Ikeja Council area. It was also with the challenges of long queue; traffic and high pump prices.

Except the NNPC outlets which sell PMS at the official pump price of N86/litre, some of the major and independent marketers selling did not. Instead, a litre of the product is sold as high as N170; N180 and N200/litre.

Our Correspondent who visited Thursday afternoon, a popular independent fuel outlet on Agunbiade Street, Oke Koto side of Agege, which has previously been banned by the Petroleum sales task force; yet, was selling at N180/litre. But the queue at the station was not as long as witnessed in some outlets visited.

As usual, the popular Ikorodu road and part of Agege motor road are not completely free from the activities of black marketers, who racket the product and sell at price as high as N250/litre.

In Abuja, the Federal Capital Territory, the situation is similar to that of Lagos. Our correspondent who moved round the city reported that long queues are seen at few stations that were selling the products.

Many motorists told our correspondent that they were prepared to sleep at the NNPC filling stations that are operating 24 hrs until they buy the fuel.

Our correspondent also observed that in FCT even filling stations that are not selling or have closed for business still have vehicles queue in their front in anticipation of when they will begin selling the product.

African Examiner gathered the fuel crisis cut across the country as Nigerians groan under hike in transport fares, food stuff and other goods and services.