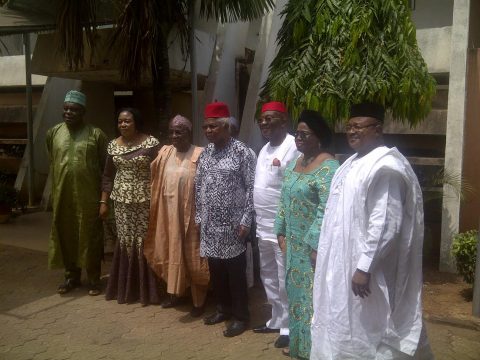 (AFRICAN EXAMINER) – Ex-Nigeria’s vice President, Dr. Alex Ekwueme has identified indiscipline, lack of internal democracy, imposition of candidates, among others, as the key factors that led to the present set back being suffered by the opposition People’s Democratic Party, PDP.

He regretted that some elements who do not know how the party was formed came in and turned the once largest political party in West Africa sub region into their private venture as well as jettisoned the philosophy of its founding fathers.

The soft spoken Octogenarian Anambra state born politician, spoke at his Enugu residence when members of the PDP’s Strategy Review and Inter Party Affairs Committee paid him a visit.

The professor Jery Gana led committee which was set up by the caretaker committee factional national chairman of the party, Senator Ahmed Makarfi, had during the visit presented the erstwhile Vice President with its 12 chapters report on how to reposition the party for a better future.

Addressing the delegation which was led by Ambassador Aminu Wali, Ekwueme, went down memory lane, reminding them of how the once ruling party was formed.

The elder statesman said that “The PDP formation is not just a political party like other parties in Nigeria, but a ‘Mass Movement’ like the African National Congress (ANC) in South Africa.

According to him, “PDP was setup to liberate the people from the stronghold of long years of military dictatorship, revitalize the economy and return power to the people.”

“The Party started well in 1999 in line with the mission, vision and ideals of the PDP by winning a total of 28 out of the 36 states of the federation and the Presidency.”

He noted that the party started well, but regretted that things, however, went wrong along the line.

He stressed that it problem began with “Imposition of candidates, lack of internal democracy and conscious efforts by some individuals that does not know how the PDP was formed to exclude and de register others from the Party,”.

Ekwueme, applauded the efforts of the late Nigeria’s President, Umar Musa Yar’Adua, “to revive the original ideals of the PDP.”

He told the delegation that he will take his time to study the report.