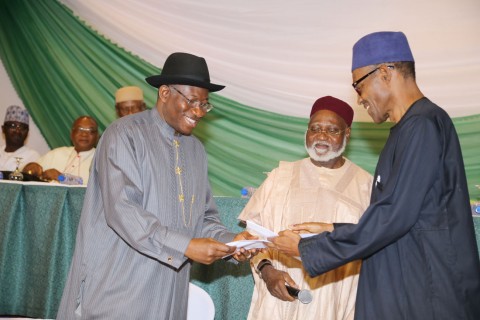 It is about three months ago when my commentary began to solely centre on the Nigerian 2015 general elections. Recall Friday, December 26, when I symbolically presented my agenda (manifesto) – to the incumbent President Goodluck Jonathan, (the blueprint focused on very weak areas of his administration and where modification were required) as well as hinted his main rival, General Muhammadu Buhari (rted) on the worries about his candidature in the ruling party family and why notable stalwarts of his party must behave themselves, so as to avoid upturning the gains of their spirited efforts to come up with another big and very intimidating opposition party in the history of democracy in Nigeria.

The commentary in question was titled: Special Focus: My Manifesto To President Goodluck Jonathan and as mentioned earlier, was posted on the date quoted above.

As the Nigerians go to polls today to decide their leaders for another four years, it is my wish to do a review of the electioneering campaigns of the political parties, in particular the major actors, the leading opposition All Progressives Congress (APC) and the ruling Peoples Democratic Party (PDP). You would recall again, the central point of the December commentary, was actually my (personal) thought on how the two could make a good showing and subsequently to woo supporters and get along with them a good number of electorates.

Starting from the opposition – the APC. I must establish that this party ran campaign with many dimensions, some circumstantial. Without hesitation, I must point out that the party from indications, especially after its widely applauded Presidential campaign on January 10, last year; emergence of its Presidential campaign as well as his running mate, Professor Yemi Osinbajo some hours later, appeared very comfortable and ready for the manner of election canvassing (issues based and violence free) so many Nigerians rooted for.

Still, it was saddening that the party was persistently distracted (through many trivialities) by his main rival – the PDP, leaving it in one end to contend with fighting back and the other end, to stay focus on the real task at hand – selling the party ideas and its candidate.

I wish to confess here that some the APC National leaders deserve some degrees of commendation, so also are the members. Equally kudos to the Party Presidential campaign organization. Please note, the main point for this accolade is the fact that, despite many untoward advances from the ruling house, they kept preaching cooperation and patience to their supporters. For them, belief was, the one (player) who is sure of victory would always comport himself and ensure the game proceeds and ends peacefully and successfully.

The above point is germane as it eventually became one of the factors which could be pointed to, which in the end, aided and ensured today’s election finally becomes a reality. Again, I must point out in particular the outstanding roles of two members of the oppositions, namely Professor Osinbajo and its National Publicity Secretary, Alhaji Lai Mohammed.

Really, the Law professor must be hailed for his outstanding performance – with respect to clear, precise, intellectual and very impressive delivery while the campaign lasted. More impressive were his presentation at his various town hall meetings within and outside the country. The Professor is cerebral and was really on top of the task before him during the campaign.

On his own, Alhaji Mohammed deserves special mentioning for his unrelenting whistle blowing task. Sometimes, one wonders how he achieves the task of coming up with as many as possible press statements almost every day, despite attending to other party assignments. Again, it is not just about the statements he issued, but facts and accuracy in those materials sent to the media and the public in general. Readers with independent mind might agree with me that it is on record that most of the alarms the publicist blew eventually turned out to be facts.

Three quick examples here which include the intimidation of the opposition leaders; indulging of the ethnic militia groups (recall the N9 billion pipeline protection contract awarded to them) and recent protests by the MASSOB and OPC in the South East and West respectively.

As for the ruling house, the bitter truth is that if Nigerians posit that the campaign that piloted today’s exercise lost all deserving values, it definitely takes the blame. From the outset, the choice of Buhari as the main rival to the incumbent President posed a threat to the entire PDP family.

This obviously but unfortunately threw up the “dirty” politics and campaign which attacked personalities; raised tension; drew so many controversies, meddlesome, mudslinging and in so many cases triggered violence. It is very disheartening that despite the January 15, Peace accord signed by General Buhari, President Jonathan and about eight other Presidential candidates, the political space was up till less than 24 hours (Friday) to election, was dominated with crises such as shooting, killing, intimidation and harassment of the opposition. Recall, Governor Rotimi Amaechi’s of Rivers State convoy was shot Thursday while Edo State Government house was invaded by soldiers. Also in Rivers State, there have been so many cases of attack on and killing of the opposition members, allegedly by the ruling party supporters and hired thugs.

Indeed, it is worrisome that the PDP with the actions of his members and ultimately leaders appear reduced the campaign to General Buhari. Which was the reason they were busy attacking and denigrating him and insisted even till the last hours to ensure he is out of the race. It was very sad that the party had to shift focus to another opposition leader as if he is the one in the contest.

The PDP to a large extent until very lately failed to run campaign with values and the type to properly showcase its candidate and convince the electorates. And as I have established in one of the previous analyses, the ruling party had persistently and somehow created impression that the election is only meant for it, hence its opposition to the use of card reader for voting accreditation and call for the sack of INEC boss, Professor Attahiru Jega on weak and flimsy grounds.

The ruling party, its leaders, members and supporters have conducted themselves in such a way that only their demands and requests must be acceded to. This is actually evident in their push for shift to the general elections originally slated February 14, 2015. One of the PDP apologists last week confessed that they influenced the elections postponement as it was clear their candidate would lose. Already, not a few Nigerians were convinced then, that it was fear of defeat that prompted the elections schedule shift, but insecurity and poor PVCs distribution were mere ruse.

Inconsistence is another critical dimension to the PDP campaign. Just as it was generally clear that the party and its members started the personality attack against members of its main opposition, yet it complained against the counter, every time it came. A good example of this was the N5 billion libel suit threatened by Femi – Fani Kayode against the APC Spokesperson, Mohammed for demanding psychiatric examination on him due to many of his misleading and offensive utterances.

Another instance on this was condemnation of the US President Barrack Obama comments – advice to the main actors to embrace peace and shun violence during polls. Many PDP supporters have been quoted, faulting Obama’s counsel, premising their position on the fact that the elections are Nigerian internal affairs; therefore he (Obama) has no business in it. Whereas, the same ardent supporters of the PDP and Mr. President did not pick holes in the US Secretary of State visit, Mr. John Kerry, South African President, Jacob Zuma and ECOWAS leaders, including Ghanaian President, John Dramani Mahama, for the same purpose. This too bad.

Now that the two major gladiators (Buhari and Jonathan) have signed another peace accord, Nigerians would expect the two to have prevailed on their members and supporters nationwide to embrace peace. But let me quickly add here that the attack on Governor Amaechi and the Edo State Government House on Thursday took place barely 24 hours after the latest peace pact. This calls to question the need for the main actors to act their talk, ditto their members and supporters.

Finally, after over three months of rigorous nationwide campaigns by the two parties, there is no doubt that Nigerians have observed, assessed and resolved who they would give their votes. Therefore, what would complement the accord just signed is to see every eligible voter who is willing, discharges his/her civic responsibilities without molestation. The same must go to all party members and their leaders. In other words, the ruling party should allow a level playing ground. Therefore, as the voters troop out to register their interest on who to lead them again, it is very significant for everybody and every stakeholder to speak and act peace for the sake of the country and her future. Wish Nigeria well again!