EndSARS: El-Rufai Speaks On Destruction Of Properties In Lagos 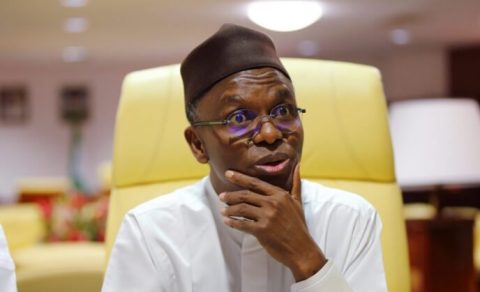 (AFRICAN EXAMINER) – Governor Nasiru El-Rufai of Kaduna State, says he cried due to the destruction of public assets in Lagos State.

African Examiner recalls that the #EndSARS protest was hijacked by hoodlums as they perpetrated havoc and vandalized and looted public and private properties.

Governor, El-Rufai, who paid a visit to Governor Babajide Sanwo-Olu of Lagos State stated that the governor tried his best to assuage the #EndSARS protesters.

A statement by the chief press secretary to Lagos state governor, El- Rufai described the destruction as “pure evil”, saying that those involve should be brought to book.

He said: “I have spent time to see some of the pictures of the destruction done on public properties in Lagos and I nearly shed tears. Anyone who cares about development and progress will cry after seeing what has been done to public facilities and people’s investment that provided jobs to youths.

“While expressing anger on police brutality may be right, destroying public properties, which will have to be rebuilt using money that is needed to invest in other public infrastructure, under the guise of protest is nothing but self-destruction. The government of Lagos and the federal government will have to re-invest scarce resources that could have been used for other things to rebuild the vandalised facilities.

“As a colleague, I can confirm that governor of Lagos did all that could be done to ensure that this destruction does not take place. It is very sad to see what had happened in Lagos. I want to assure you that we will support you getting Lagos back on track. We will do whatever support Lagos needs from us to get back better.”

The Kaduna state governor sympathized with the police and other victims of the violence to remain calm because the government will compensate them.

Gov. Sanwo – Olu disclosed that the state is in the right track in getting back its loses and revive the economy.