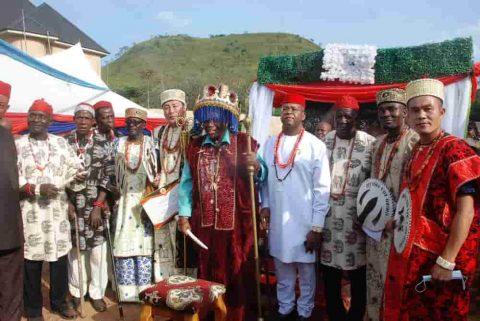 (AFRICAN EXAMINER) – In recognition of his contribution to the development of his domain, especially in area of job creation, the traditional ruler of Obimo Community in Nsukka Council area of Enugu state, Southeast Nigeria, Igwe, Spencer Ugwuoke, weekend  conferred the Chieftaincy title of (Onwa Obimo), meaning, “Moon that shines for others on a Chinese National, Mr. Wang Tong and others.

Our Correspondent who covered the colourful ceremony held at the Igwe’s palace, reports that  natives of the community had during the event which attracted Chinese citizens and top personalities  from different parts of Nigeria, rolled out their drums to celebrate Tong, who is the  Managing Director/Chief Executive Officer (CEO), of a Charcoal producing firm based at Obimo.

Speaking during the event, Igwe Ugwuoke, said the gesture was to appreciate Mr. Tong and his team for their contribution towards the development of the locality.

He stated that citing of the charcoal factory in the community had not only provided job opportunity for the teeming unemployed youths of the area but has enhanced its economy.

Mr. Tong, was honoured alongside three of his colleagues which included, the General Manager of the Company, operating under the name, KWO- Chief Investment limited, Mr. Chen, a Nigerian partner, who is also the incumbent Deputy Chief Whip, Plateau state House of Assembly, Hon. Mohammed Nababa Abubakar and the factory Manager, Mr. Wahab Yusuf, also a Nigerian.

“So the honour we are giving to them is to attract investment to my domain, it is only four of them, I don’t want to attract crowd because COVID 19  restricted us from the number of people to entertain at a particular occasion” Igwe  Ugwuoke said.

“Simply put, what we have come here today to do is to accord hour to whom it is due, because they have been doing well in our Community since they came.

According to the Monarch, “we are also using this opportunity to call on investors to come to Obimo and invest, because we have enough land and friendly environment. Our security arrangement in the Community is very very sound, just like the security in the state is also sound compared to to other states in the country.

“Our governor is maintaining law and order, security should be the priority of any responsible government, after which every other thing comes . Amenities comes after security. When there is no security, you cannot do anything” he stated.

On the deplorable condition of the major road that passes through the Community, the Igwe said  “am not blaming the state government. It is a federal road, from here to Adani, to Onitsha, is just about one hour and 30 minutes, but because of its terrible condition, the road has been a dead trap

In his remarks shortly after receiving the Chieftaincy title, Mr. Tong, expressed appreciation to the Monarch and his subjects for the honor done him and his colleagues.

The Chinese businessman, who spoke through an interpreter, who is also his close friend, and a Chinese based Entertainer, Mr.  Ifeanyi Ogbobe, said  the people of the area have been so wonderful and hospitable  to them since they arrived the Community.

He added that  the recognition would no doubt spur him to continue contributing  his quota as a way of Corporate  Social Responsbilty (CSR) of  the Company towards the advancement of the Community, saying they have really been enjoying their stay in Nigeria and Obimo Community

Mr. Tong,  who disclosed that the company currently have a total of 600 Staff strength drawn from Obimo, and other parts of the state, including elsewhere, said as part of measure to give back to their host Community, plans are afoot for the establishment of a school in the area, stressing that since education is power, such facility would if realised, would go a long way in equipping youths of the locality for future challenges.