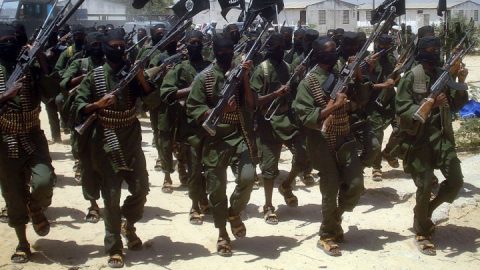 Somali officials says two suicide trucks filled with explosives blew up Sunday at the AMISOM military camp in Bula Marer, 110 km south of Mogadishu and one of the main towns in the region. This was followed by al-Shabab infantry attack on the camp.

Moments later a bomb-laden mini-bus approached another AMISOM base in the nearby Golweyn village and exploded.

“There was one main attack on Bulo Marer, all the other attacks were intended to distract troops in those camps from reinforcing and helping Bulo Marer,” Mohamed said.

In Bulo Marer they detonated two trucks and then militants attacked the camp from the back in attempt to enter amid the chaos, but troops fought them off.” At least 10 Al-Shabab fighters were killed in Bulo Marer fighting, security sources told VOA Somali, on condition of anonymity.

In Golweyn village, a minibus filled with exposed tried to hit the entrance of the camp, but AMISOM troops destroyed the bus with a rocket propelled grenade, according to Mohamed.

Mohamed said AMISOM in Bulo Marer and Golweyn are relatively close to the main highway linking Mogadishu to the Southern regions of the country, which allowed militant trucks to get closer to checkpoints controlled by AMISOM forces.

“The suicide trucks just get off the main road and headed for the AMISOM camp, but soldiers identified the threat and that they were suicidal vehicle and prevented penetration,” he said.

A civilian man who was guarding the offices of a local phone company was killed and seven others civilians were injured in the explosions in Bulo Marer, Mohamed said. Residents say the civilian death toll could rise.

Residents also reported hearing sporadic gunfire on farms near the AMISOM base.

Residents in Bulo Marer say there are casualties among AMISOM forces, but could not give details because AMISOM cordoned off the area. An AMISOM spokesman could not be reached for comment.

Meanwhile, Al-Shabab militants have also attacked Somali government positions in Mashallay and Qoryoley, but Somali forces have repulsed these attacks too. A resident in Qoryoley told VOA Somali that two militants were killed in the clash. The figure was confirmed by Mohamed.

Al-Shabab claims 59 Ugandan soldiers and 14 Al-Shabab militants were killed in the attacks. That claim has not been independently verified.

Mohamed says Al-Shabab is marauding in the region without major counter attack from AMISOM and Somali government forces. He says for four years AMISOM and Somali troops have not launched a major operation aimed at decreasing and destroying Al-Shabab threat. He says political friction in Mogadishu are turning attention from a region where Al-Shabab carries out most attacks against Somali and AU forces./VOA