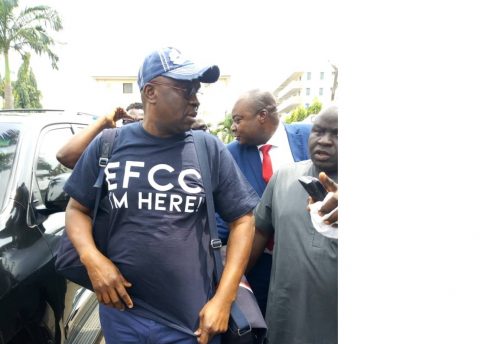 Mr. Fayose who appeared in a black customized T-Shirt with the inscription: “EFCC I’m Here” on top of a pair of jeans and a face cap, arrived the Wuse 2 EFCC office in company of his allies, the Rivers State Governor, Mr. Nyesom Wike and a former Minister of Aviation, Mr. Femi Fani-Kayode.

The former Governor was also seen carrying a bag pack containing his clothes and other personal effects.

Fayose had said Monday that he would come to the EFCC office with his bed and pillows.

While addressing newsmen at the EFCC office, Mr. Fayose alleged that the EFCC deployed its personnel to his home, despite his willingness to honour the Commission’s invitation.

Fayose was also accompanied to the EFCC office with his Lawyer, Chief Mike Ozekhome (SAN).

The Lawyer appealed to the Commission to avoid abusing his client’s right.