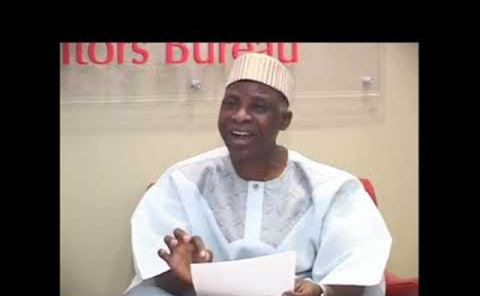 (AFRICAN EXAMINER) – The ongoing global campaign on environmental pollution, global warming, climate change, and the spread of the pandemic corona virus have raised concerns and difficulties for people to envision a future in which healthy people would inhabit a healthy planet without struggle. In keeping with this conviction, the level of public interest in climate change, including myself, have risen significantly in recent days, especially as the entire global community is dealing with the deadly effects of the most dangerous pandemic corona virus disease.

As an alumnus of the just concluded environmental and science research project at the university of Phoenix Arizona USA, I am omnipotent and excited to deliver a keynote address and at the same time express my sincere appreciation and congratulations for this year earth day celebration while I look forward to witnessing many Earth day celebration in future.

The interchange between humans and environmental systems is at the core of environmental challenges that affect and undermine human values. In other to predict the cause of the present global environmental changes, it is necessary to understand the root cause, consequences, and responses, some of which can alter the course of climate change.

Consequently, it is also imperative to focus our attention on the interactions of environmental systems, which include the biosphere, the geosphere, the atmosphere, the hydrosphere, and human systems, involving economic, political, cultural, and socio technical value systems. As leaders of tomorrow, the question for our teenagers now is, what should we do as a people to prevent climate change from hurting our value? How can we human beings respond to actual global changes? What are the consequences of delaying humanity or inaction to combat climate change and global warming? To answer these questions, both natural and social scientists, economists, educators, and youths must all have a sense of belonging to work together to combat this global phenomenon.

In celebrating the 2020 Earth Day, another global environmental issues we must also focus on is air pollution. Air pollution is all around us, both Indoors, outdoors, in cities and in the countryside, even in our classroom, churches and mosques. It affects us all, whether we realize it or not, Air pollution is a cancer that humans have long taken for granted. The air we breathe contains the smell of cold and hot air that threatens everyone, from unborn babies to children who walk to school, to women who cook at campfires and teenagers that plays basketball or football.

According to empirical research Air pollution is responsible for unprecedented and senseless destruction of human lives and property, on a larger scale than wars and any form of violence, malaria, HIV/AIDS etc. It is more deadly than smoking, and it can quickly destroy our economy and ecology. As a former airline instructor, I have the opportunity to travel around the globe and witness the rebirth of industrial revolution especially in India and China, America, and Europe.

My observations show that the world is outsourcing to China and India only for cheap labor. But the consequence of the outsourcing/industrial revolution is the resurgence of an uncontrollable air pollution pandemic disease. By seizing the opportunity of this year Earth day celebration to launch campaign against Air pollution, climate change and global warming, we took the bull by the horn to set a record that will make this world a better place for humanity.

The impact of air pollution on human health, cause immediate and acute health problems, which include heart and respiratory illness, add stress to heart and lungs. Air Pollution is a phenomenon that has swept the world for decades, so the fight against air pollution and victory will determine how we can make the world a better place to live. Air pollution control is vital and should be on a priority list of governments, United nations, and the global community. The clean air act policy has come as checks and balances and promoted the stewardship of resources and future generations through the passing of legislation and bill on global warming, climate change, public health, job creation and reduction of greenhouse gas emissions into the law of the state and federal government.

Although some schools of thought believe that a carbon tax will encourage many industrial companies to switch to clean energy. Others believe that this event will put a heavier burden on low-income, low-privileged people, so it is regressive. To justify the successful reform of the carbon tax, the government must first determine the external cost of greenhouse gas emissions per ton, it is mandatory and very important for both scientists and economist to reach an agreement and conscious of opinion on which assumptions to use since the ideal impact and consequence of a carbon tax is to show the true cost of burning carbon.

Given its challenges, the government should remove subsidies on fossil fuel, which consists of coal, oil, and gas costing over 25 billion a year, subsidize wind, solar, and hydro power, increase energy efficiency standards, build more public transportation to reduce cars on the road and finally implement carbon emissions trading. In good faith, the carbon tax is a necessary solution to stop global warming, the government should eliminate all subsidies to the fossil fuel industry, and the United Nations should impose sanctions on any country that does not comply with carbon tax regulations. I seize this opportunity to congratulate everyone once again as a benchmark for Earth Day celebrations and for a successful endeavor on global warming and environmental pollution.

Amb. Tunde Adetunji is the pioneer and founder of the African Heritage Center (AHC) Atlanta, Georgia. A community oriented professional, an erudite scholar, and a BSC research fellow in global business management from of university of Phoenix, Arizona. USA. His research was based on Lake Lanier as case study on environmental pollution, global warming, climate change, and the spread of the pandemic disease. Lake Sidney Lanier is a large reservoir in the northern portion of the U.S. state of Georgia, created by the completion of Buford Dam on the Chattahoochee River in1956.

It encompasses 38,000 acres on 59 square miles of water, and 692 miles of shoreline at normal level of “full pool” of 1,071 feet above mean sea level. Lake Lanier, a major landmark venue of the centennial Olympic 96 is a pride and boost to the state of Georgia leisure and tourism. It also supplies a drinkable water to millions of Georgia citizens.

Adetunji project has attracted a positive reaction and attention from the core of engineers that manage lake Lanier for the state of Georgia. Also, his project has been shortlisted as part of the Africa heritage foundation on Africa/Atlanta project nominated for the energy globe award 2020/21 on climate change, global warming, and environmental degradation in Vienna Austria,

The numerous positive outcomes of Amb.Tunde Adetunji visionary project since1996 centennial Olympics has also gained attention of the Africa union, the united nations and several university institutions globally. Adetunji worthy initiative enter the annals of historical legacy with the inauguration and passing of resolution on his annual Africa day celebration in Georgia, and Nelson Mandela Day/annual evergreen life achievement award by the state of Georgia through his visionary project along with his induction and his work as the first African in the diaspora into the Martin Luther King chapel hall of fame in 2019.

He envisaged this research project along with “Brain drain to Brain gain” lectures series which has  become an intellectual material on a global tour once again to serve as wakeup call and check and balances towards sustainable development, global warming and climate change.

Adetunji is a visionary an idealist and realist, he is the pioneer and founder of Diaspora as the sixth region of Africa. He is a life coach, a broadcaster, a speech pathologist and a lecturer on cultural anthropology. He is a fellow of National institute of policy and strategic study Kuru, Jos, Nigeria, USSA academy award and state of Georgia outstanding citizen 2019. Adetunji passion and commitment towards creating a new world order, asserted that this research would provide insight to numerous lake and Dam across the length and breadth of Africa and the world in general. He is optimistic his project is on course to unite the world as a global village despite race color and gender.