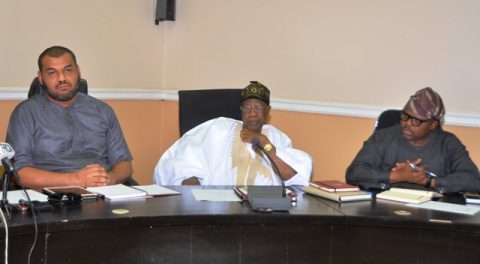 ABUJA, NIGERIA (AFRICAN EXAMINER) – The Federal Government (FG) has insisted that President Muhammadu Buahri’s state of health is stable, tasking the mass media to avoid ‘’disinformation’’ and ‘’fake news’’, so as to earn credibility.

Minister of Information and Culture Alhaji Lai Mohammed made the call Friday in Abuja when he paid a courtesy visit to the headquarters of Daar Communications Plc – owners of the African Independent Television (AIT) and Raypower radio station.

The Minister said “What happened in the last couple of weeks is quite worrisome. Mr. President left for a vacation. When he was leaving, he transmitted the necessary letter to the National Assembly on who was going to act. He said during his vacation, he will also use the opportunity to carry out his routine medical check-up. Within 12 hours of leaving the country, the news was that he had died, and when that was not sustainable, they said he was critically ill.

”Some even went on to say that he was actually flown out of the country in an ambulance, when the whole world saw when he was leaving and it was televised. For a week or so all we heard was this dangerous disinformation’’.

Alhaji Mohammed urged the media to eschew disinformation and fake news, saying the phenomenon, if left unchecked, could damage the credibility of the media and endanger the country’s peace and security.

“The country today is under the siege of disinformation and fake news. Unfortunately this dangerous trend, if not checked by the media – especially the traditional media – is capable of tearing the fabric of the society and bringing the country to its knees,” he restated.

FG Spokesperson said that to make matters worse, a section of the traditional media often amplifies the disinformation and the fake news being spread on the Social Media.

He noted that in spite of the incursion of the Social Media, the traditional media remained the most credible platform, hence it should not join forces with the purveyors of falsehood.

“My greatest problem is with the traditional media, because most people will probably say Social Media is what it is. But when the traditional media also latches on the same fake news and the same disinformation, then I begin to get worried for many reasons. Number one, it affects the credibility of the media itself and once the media is no longer believed, once the media loses its credibility, then it has serious consequences for the media and the society as a whole,” the Minister stressed.

Alhaji Mohammed recalled the role disinformation, fake news and hate speeches played in the 1994 genocide in Rwanda in which over 800,000 people were killed, and urged the media to draw some lessons from that unfortunate development.

He expressed concern that in the past few weeks, the media was saturated with false news on the health of the President, and that even when the government and the ‘’Presidency promptly clarified that the President is hale and hearty, some people did not believe them because of the lies they have read in the Social Media’’.

The Executive Chairman of Daar Communications Plc. Chief Raymond Paul Dokpesi, said the emergence of fake news was a global phenomenon, but noted that the Media Group has been absolutely committed to upholding the highest standard of journalism.