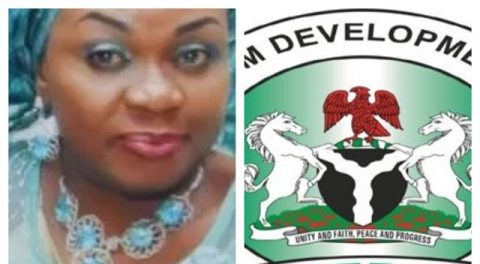 (AFRICAN EXAMINER) – Former acting Director General of the Nigerian Tourism Development Corporation (NTDC), Mrs Mariel Rae-Omoh, has sent a petition to the Minister of Information and Culture, Alhaji Lai Mohammed, protesting her demotion to the position of deputy director after her removal as acting director general.

Rae-Omoh contended, in the petition titled: “Re: Implementation of the Report of the NTDC Staff Records Verification Committee: Petition on my demotion to the post of Deputy Director, GL.16,” dated March 13, 2017 and sent through the permanent secretary, that she should have justifiably reverted to her last position of director from where she was appointed as acting director general on December 28, 2016 for being the most senior director.

In the petition, in which she alleged gross injustice in the decision of the minister to approve her demotion via a March 10, 2017 letter, Rae-Omoh prayed the minister to “revisit the verification exercise at NTDC to ensure that justice is not only done but seen to be done to all concerned” and to “graciously take a look at my career progression chart indicated on page 4, and direct my reinstatement as director.”

According to her, “I joined this Corporation on Grade Level 12 on 2nd March, 1992 while Mr Boniface Eboka (Director of Administration, who was first appointed before her as acting director general of the Corporation) was on Grade Level 10 at the time.

She claimed in the petition that her current travail was masterminded by Mr Eboka and a few staff members in his department who, according to her, busied themselves writing petitions against her for the two months or thereabouts that she was in the saddle as acting director general.

“Ever since I assumed office, the Director of Admin., Mr Eboka with a few of his staff, was never in the office.  For two months, they were either in his residence or in a cyber cafe writing petitions against me.  The first thing they came up with was that I have problem with my certificate for which they went to press.”

She queried, “How can someone whom the Federal Government of Nigeria granted a scholarship from the Federal Ministry of Education since 1980 to study abroad be told in 2017 (37 years later) that her certificate is questionable, just because some elements who are mediocre wrote petitions?” and cried:  “Hon. Minister Sir, my integrity has never been at stake!  Please right the wrongs.”

She also suggested that her investigation into a questionable purchase under Eboka’s short stint as acting director general was one of the reasons she became a target of petition writing.

According to her,   “During the few weeks Mr Eboka acted as Director General, he claimed to have bought a bus from Coscharis Motors at the cost of N27.750m but a refurbished bus was supplied to the Corporation.  I set up a five-man committee to investigate (investigation report is attached herewith).

“It was discovered that Mr. Aliyu Mohammed – the Transport officer, the man who signed the petition to the Hon. Minister, negotiated with the salesman at the rate of N18m (see pages 8 and 9 of the committee report).

“As soon as this investigation began, Mr. Eboka, with some members of his departmental staff who were equally absenting themselves at a time from work, came up with another petition to the Honourable Minister.

“The same Director (Human Resources) who recommended that I was the most senior Director in the first instance was coerced into writing that I should be demoted from my position as Acting Director General to Deputy Director.  This is unfair!”

Rae-Omoh said: “Whereas I graduated in 1983 and finished my NYSC in November, 1984, having worked in the private sector from 1985 to 1992, I was engaged in NTDC 25 years ago after due processing of my application for employment and consideration given to my year of graduation and relevant cognate experiences in placing me on Principal Tourism Assistant on GL.12 Step 2.

“Over the years, it is on record that officers have been employed into this Corporation based on the same criteria in which I was engaged ab-initio. It has become worrisome why my own case had become different.  The concluded verification exercise in NTDC and the demotions that were a fall out of the exercise appear selective.”

She cited extant cases of recruitments on high grade levels in other parastatals to question why she had been singled out for demotion in a Corporation she has worked diligently in the last 25 years.

She stated: “Evidence abound in other parastatals that people are still being recruited on high grade levels.   At the National Gallery of Arts for instance, a school mate of mine, Mrs Evelyn Otaigbe-Ikuenobe, who graduated six years after me is a full-fledged Director as at today.

“She joined that parastatal four years ago.  She had never worked in government and the former Hon. Minister of Culture, Tourism and National Orientation, Chief Edem Duke, approved her appointment into National Gallery of Arts on GL.17.

She pointed out that the present Director of Entertainment in the Ministry of Information and Culture, Miss Grace Gekpe, whom Chief Edem Duke promoted and created that Department for, was on Grade level 08 when she (Rae-Omoh) was already on GL12 in the service.

“Another case in question is that one of the former Confidential Secretaries here in NTDC, Miss Etima Akpan of Admin Department, was not affected by this demotion perhaps because she is very close to her Director, Mr. Boniface Eboka. There are several other cases too many to exhaust on this page,” she added.

Explaining that these were people who never had any stint in the Civil Service before such appointments, she declared: “I see my demotion as a mere witch-hunting and an agenda of interested parties to bringing me down.”

Describing the move against her as conspiratorial, she said the letter of demotion did not say she should revert to her former position of director but down as deputy director, which she was supposed to have been to since 2007 but which she was denied and eventually promoted to in 2009.

“Hon. Minister, Sir, is it fair for me to rise from GL.12  to GL.16 in 22 years, having laboured so hard, and as a professional to the core and a hard worker…?” she lamented and pleaded “please revisit my career progression and place me right.  I am supposed to have been a Deputy Director since 2007 and a Director since 2011.”