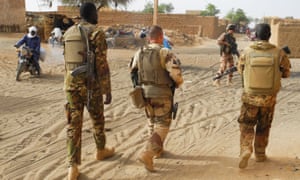 (AFRICAN EXAMINER) – French and Nigerien soldiers on Monday combed a wildlife reserve in Niger and the surrounding area for traces of the gunmen who killed six French aid workers a day earlier, a French military source said.

The unidentified gunmen, who rode on motorbikes, attacked the group who worked for the humanitarian charity ACTED in a giraffe reserve just 65 km (40 miles) from the capital Niamey.

A Nigerien guide and a local driver employed by ACTED were also killed.
ACTED said in a statement the group had been “senselessly and cowardly murdered by armed individuals’’.

No one has claimed responsibility for the assault, but France and other countries have warned people against travelling to parts of Niger where militants including Boko Haram and an affiliate of Islamic State operate.
“Military operations are ongoing today,” the military source said.

The reserve, southeast of the capital, is a popular attraction in Niger, a vast country that borders seven states in an unstable region including Libya, Mali, Chad, Algeria and Nigeria.

France, a former colonial power in the region, has deployed thousands of troops in the arid region south of the Sahara desert since 2013.

But militant violence has been on the rise.
NAN