Gambia Impasse: Barrow to Stay in Senegal Until Inauguration 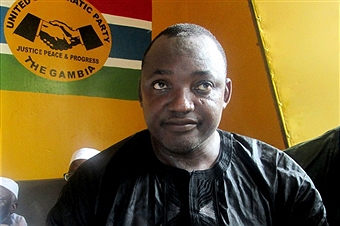 BALTIMORE, MD (AFRICAN EXAMINER) – The inauguration of Gambia’s president-elect Adama Barrow will go ahead this week, his spokesman insisted Sunday, as he landed in neighbouring Senegal to wait out the final days of President Yahya Jammeh’s mandate.

Jammeh has refused to cede power after disputing the result of a December 1 election won by Barrow, triggering a crisis that has led the president-elect to appeal for help from west African allies.

“Jammeh’s term shall end on the 19th (of January) and the same date president-elect Barrow’s term begins. Nothing will change that. He will be sworn in and shall assume office on that date without fail,” spokesman Mai Fatty told AFP in Dakar.

Fatty would not expand on where the inauguration would take place and under what circumstances, given the expected difficulty for Barrow of returning to Banjul.
Earlier in the day it was confirmed Senegalese President Macky Sall had accepted a request by Liberian leader Ellen Johnson Sirleaf to host Barrow in Dakar until his inauguration.
A source in the Senegalese presidency told AFP the agreement was reached following consultations with other heads of state from the Economic Community Of West African States (ECOWAS) at a Bamako summit.

The 15-nation bloc has repeatedly called on Jammeh to respect the result of the vote and leave after 22 years in power.
Nigerian President Muhammadu Buhari, Sirleaf and Ghana’s ex-president John Mahama have appealed to Jammeh to step down twice in person, without success, most recently on Friday.

Barrow was the surprise guest at the Africa-France meeting in Bamako, where he was welcomed as a head of state and introduced to several world leaders.
The leaders of at least 30 nations had gathered to discuss jihad on the continent and Africa’s impact on the European migrant crisis — but The Gambia’s political impasse dominated events.

The spectre of a military intervention in The Gambia has arisen in recent days following declarations by the United Nations and African Union that boots on the ground could get the green light without a rapid resolution of the crisis.

Mohamed Ibn Chambas, head of the UN Office for West Africa and the Sahel, said on Friday that ECOWAS would ask the Security Council to approve the deployment of troops to The Gambia if Jammeh continues to refuse to leave office.

ECOWAS has made clear in the past that force will not be ruled out as a last resort, but the Nigerian army has denied reports it is preparing troops for a Gambian intervention.
There are just three days left of Jammeh’s five-year term, and he has warned the international community against “undue external interference”.
Jammeh has said he will not stand aside until the country’s Supreme Court decides on his legal challenge seeking to annul the result of last month’s polls, which he had initially conceded losing.

The ruling however is unlikely to happen before May.