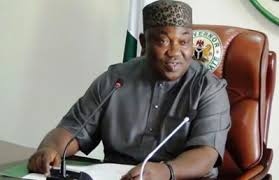 ENUGU, NIGERIA (AFRICAN EXAMINER) – As part of measures to equip magistrates in the state to enhance service delivery, in particular, speedy dispensation of justice, Governor Ifeanyi Ugwuanyi of Enugu has donated dozens of laptops and desktop computers to the law officers.

The items donated by the Governor included 76 laptops, 25 desktop computers and 20 printers, which were procured by the Ugwuanyi led administration.

The Governor explained that the new computers would be used to replace the obsolete manual typewriters that had been in use in the state’s magistrate courts.

Receiving the items at the Enugu High Court, the Chief Judge of the State, Justice Ngozi Emehelu, who was represented by the Chief Registrar, Mrs. Ebele Egumgbe, applauded the Governor for his vision and kind gesture to the judiciary.

She expressed delight at the commitment of the Governor towards the welfare of the magistrates, and other public servants in the state despite the prevailing economic challenges in the country, adding that the modern technological devices would improve their productivity and service delivery.

According to her, “Enugu State Governor is a rare leader, despite the economic crunch in the country, he has continued to improve the welfare of all, including magistrates in Enugu State in record time by distributing computers and other items to assist each and every one of them’’, She said.

The Chief Registrar, who distributed the devices to the beneficiaries on behalf of the Chief Judge, assured the Governor of judicious use of the items for the purposes they were procured.

Also speaking, the Chairman, Magistrate Association of Nigeria, Enugu State chapter, Mrs. Martha Aroh-Onuoha hinted that the Governor in his magnanimity approved funds for the procurement of the items in keeping with his campaign promise to reform the administration of justice in the state.

She equally thanked Governor Ugwuanyi for his continued support to the association and promised that the items would be put to use effectively.