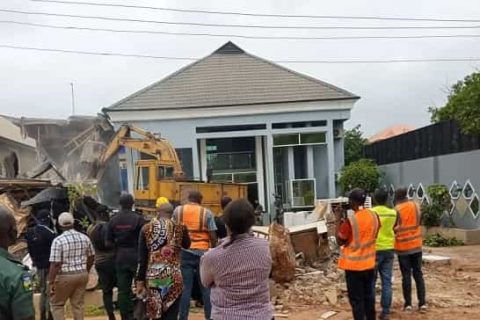 (AFRICAN EXAMINER) -The Governor Ifeanyi Ugwuanyi led Enugu State Government on Friday demolished a twin duplex buildings belonging to an Architect, Mr John Emejulu, who recently pulled down the concrete perimeter fence of the Enugu Akanu Ibiam International  Airport, on the claim that it was erected on portion of his land.

The Enugu state government action came less than 24 hours after Nigeria’s Minister of Aviation, Senator, Hadi Sirika, visited the Airport to see the demolished perimeter fence himself after which he condemned the act, and vowed that Emejulu, would be dealt with maximally by government.

Officials of the Enugu Capital Territory Development Authority (ECTDA), led by its Chairman, Mr Josef Onoh, who supervised the demolition, said that the building stood on waterway, a claim Emejulu, dismissed swiftly, saying it was purely a reprisal attack by Enugu state government.

The Notice of Violation served on the victim by the Department of Building Inspection, (ECTDA) equally claimed that the structures violated building standard.

Reacting to the demolition, via telephone, Emejulu stated that the twin duplex which he built in 2012 had a duly approved plan and did not stand on waterway.

He however, described the demolition of the property as a duly planned reprisal by the state government due to his move to recover his landed property illegally sold by some government officials.

Emejulu hinted  that prior to August 12, 2020, he never received any notice of intent to demolish his property on the ground that it was built on waterway as claimed by the state government, and wondered why they singled out his structures for demolition on the pretext that it was built on waterway while other adjoining property in the neighborhood where not touched.

He said: “After the incidence of Aug. 12, 2020 when I had gone to Airport Layout Phase IV and V to enforce a court judgment on my plots of land forcefully taken by the government and private individuals, I received a notice from ECTDA.

“They came to my house that evening and wrote ‘remove within 24 hours’ on my fence. This morning they came with earthmoving equipment and demolished my house. I lost everything.

According to him, “they pasted a notice on my building and claimed that it was the third time they were serving me, unfortunately for them, the date they wrote with red paint on my wall is Aug. 12, 2020.

Emejulu added that the demolition of his property was a clear indication that the government was chastising him and had a hand in the forceful takeover of his land.

It be recalled that he had gone to Airport Layout Phase IV and V to enforce a court judgment in respect of a hitherto disputed land measuring 400 plots. In the course of the enforcement, he pulled down some pillars of perimeter fence of Akanu Ibiam International Airport which was affected by the court judgment.

An Enugu State High Court had in 2017 gave a judgment in favour of Emejulu, pertaining to the expanse of land in Airport Road Layout, Phase IV and V.

However, previous attempts to execute the court order failed due to alleged interference of highly placed politicians in the state.

Emejulu, in suit no. E/165M/2020 returned to the court through an application by Motion on Notice for the court to compel the Commissioner of Police, Enugu State and the Inspector General of Police (IGP) to execute the court judgment.

On June 3rd, 2020, Justice J. L. C. Okibe granted an order of mandamus compelling the police to enforce the judgement and prosecute anyone that hindered the duly executed judgement.

Armed with the court judgment, Emejulu in the early hours of Wednesday stormed the location with earthmoving equipment to take possession of the landed property during which alleged illegal property valued several millions of naira, including the Airport perimeter fence were pulled down.

He alleged that some politicians in the state, including the member representing Enugu East/Isiuzo Federal Constituency in the House of Representatives, Mr Cornelius Nnaji and others were behind the trespass on the land.

Emejulu, an architect, said that he bought the 400 plots of land in 2008 from Umuenwene Iji Nike community in Enugu East Local Government Area of the state.

Addressing newsmen on Thursday after inspecting the site to ascertain the level of destruction, the Minister of Aviation,  expressed deep sadness that the perpetrator could take such an unlawful act by destroying a “national security asset”, at a time the federal government was in the course of delivering the Enugu airport, on August 30, as promised.

Sirika, who described the action as unfortunate, unacceptable and unbecoming, said that “he (Emejulu) has given the government the opportunity to show how not to wilfully destroy public asset belonging to over 200 million people.