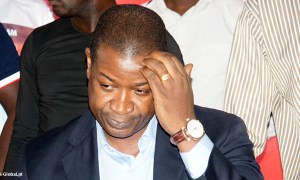 (AFRICAN EXAMINER) – Prime Minister Nuno Nabian of Guinea-Bissau and several other senior officials have tested positive for COVID-19, the respiratory disease caused by the novel coronavirus, the Lusa news agency reported on Wednesday.

Nabian and at least three other members of his government are infected, Lusa quoted Health Minister Antonio Deuna as saying in a televised address.

A government source told Lusa that the other infected officials are Interior Minister Botche Cande and two secretaries of state, Mario Fambe and Monica Buaro.

The cases are related to a senior Interior Ministry official who has died, Lusa reported.

Guinea-Bissau had recorded 73 confirmed cases of COVID-19 and one death by Wednesday, according to the Africa Centres for Disease Control and Prevention.

The small country, which has a population of about 1.8 million, is considered one of Africa’s most volatile states, with 16 coup attempts since it gained independence in 1974. Four succeeded.

Nabian has served as Prime Minister since February. (/NAN)