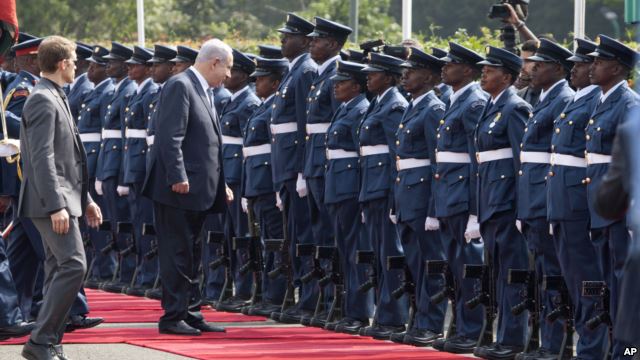 Upon arriving in Nairobi Netanyahu was greeted by an honor guard detachment from the Kenyan Air Force.

The Israeli prime minister later told reporters his trip is about rebuilding ties with Africa.

“We believe that Africa is a continent on the rise and a rising tide will help everyone. A rising tide lifts all ships and working together, we all stand to benefit.”

Investment and security cooperation are high on the agenda.

Netanyahu said Israel is united with African countries against terrorism, calling it a “common war.”

“The single biggest challenge that we face not only as a nation, not only as a continent, but as a community of nations is the threat against our security caused by these deranged people who believe in no religion but who threaten the livelihoods of innocent men, women and children across the globe,” Kenyatta said.