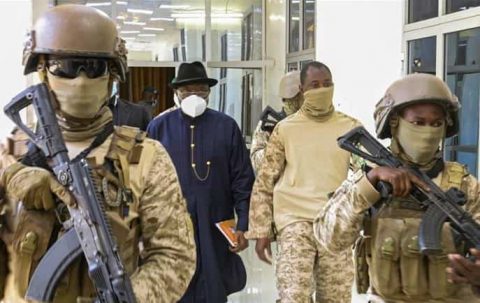 (AFRICAN EXAMINER) – Talks between West African mediators and Mali’s military coup leaders ended on Monday after three days of discussions without any decision on the make-up of a transitional government, a junta spokesman said.

But talks had focused on who would lead Mali and for how long, rather than the possibility of reinstating the president, diplomats said.

The coup has raised the prospects of further political turmoil in Mali which, like other countries in the region, is facing an expanding threat from militants.

Col. Ismael Wague said mediators would report to regional heads of state ahead of a summit on Mali this week but, highlighting the backing the soldiers enjoy, the final decision on the interim administration would be decided locally.

“Nothing has been decided. Everyone has given their point of view. The final decision of the structure of the transition will be made by us Malians here,’’ Wague.

Former Nigerian President Goodluck Jonathan, who led the regional mediation team, said they requested and were granted access to Keita.

President Keita told us that he has resigned. That he was not forced to do so.

“That he does not want to return to politics and that he wants a quick transition to allow the country to return to civilian rule,” Jonathan told reporters.

Talks were taking place with the threat of regional sanctions hanging over the junta, known as the National Committee for the Salvation of the People (CNSP).

“Mediators will discuss this with the heads of state so they can lift or at least ease the sanctions. Sanctions are not good for us or the population,” Wague said.