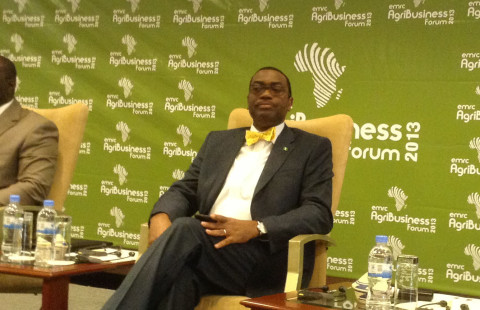 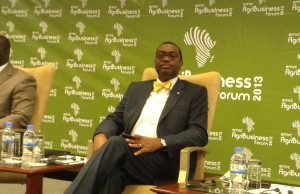 Indigenous investors who have made fortunes in other sectors of the economy are now increasingly investing in agriculture under the new dispensation of agricultural transformation agenda. The new commercial farmers, seeing the prospects in the agricultural sector, are putting huge investments into agribusiness investments.

The Minister of Agriculture and Rural Development, Dr. Akinwumi Adesina, made these disclosures to the audience at the on-going Agribusiness Forum 2013, an annual programme for Africa, organised by the European Marketing Research Centre (EMRC) based in Brussels, Belgium. “Our billionaires used to make money” from other sectors, including oil, “now, they are moving back to the farm,” he noted.

The theme of the EMRC forum 2013 is “The Agri-Food Sector: A Catalyst for Sustainable and Inclusive Growth in Africa.” The minister was optimistic about the prospect of agriculture, as he said “the future of Africa is bright. We need to secure that future,” and “agriculture as a business is what is needed to secure that future.” The minister gave specific examples. “We have treated sorghum as a subsistence crop before now. We are now turning sorghum into a cash crop,” he said.

The minister vowed that “Nigeria will be the largest processor of food sorghum,” as he explained that “Dansa is investing 36 million euros into the production of high energy foods,” using sorghum as one of the inputs. “Food Concept,” a Nigerian investor, he added, “is partnering with a Rwandan counterpart in a $27 million investment in poultry.”

Dr. Adesina, concurred, however, that “investing in infrastructure is very expensive, but, in Nigeria, to overcome that constraint, “we have developed staple crops processing zones,” which are to set up food manufacturing plants, a cluster of infrastructure “to close the missing link between agriculture and industry.

Another example given by the minister was cassava, a low-value crop, which is now being changed to a high-value crop. “We are working on derivatives of cassava,” he pointed out, adding that “we can produce lowland rice, irrigated rice and floating rice in Nigeria.” Among other reasons why he said agriculture needs to be re-visited is the “slowing down of the oil economy.” He emphasised that, on a continental scale, “this is Africa’s time,” and “Nigeria is the fourth fastest growing economy in the world.”

To make agricultural transformation impactful, Dr. Adesina said certain underlying factors have to be fixed. “At the centre of any agricultural revolution is what you do with your inputs,” he said. Referring to the old unproductive system of government’s involvement in fertiliser distribution, the minister said that “the problem of fertiliser distribution is an elite problem.” To bring the effect of the transformation agenda to bear, he noted, “we decided to turn the comparative advantage in food production to competitive advantage by adding values through processing.”

To make Nigeria more competitive in cassava industry, the minister noted that processing has to be given attention. “Thailand produces 10 per cent of cassava globally, but adds value to 80 per cent of that,” the minister observed, but added that, as a nation, “we must necessarily become the largest processor of cassava in the world. By including 20 per cent of High Quality Cassava Flour in bread making, Nigeria will “put $1.5 billion back to the hands of farmers and processors, creating jobs at home.”

Rwanda’s Minister of Agriculture and  Animal Resources,  Dr. Agnes Karibata, disclosed that her country will take advantage of GES developed and currently implemented by the Nigerian government. Karibata advised that attention should be focused on untapped regional market potential as the population in regional markets is also significant as consumers. We are consuming too much of imported processed stuffs that we can process locally.

Professor Pierre Mathijsen, President of EMRC had the following to say: “Africa is visited by everybody. Africa attracts people. Africa has a difficult past, a post-colonial past. After World War II, the only thing Europe was thinking about was food. The Europeans started producing, and produced too much. The over-production, we exported. As a result, Africa’s agriculture suffered. Now, we need to help Africa regain its strength by strengthening the small agricultural entrepreneurs.”

Rwandan Prime Minister, Dr. Habumuremyi Pierre Damien, sharing his country’s experience, pointed out that, “in recent past, it has been noticed that investment in agriculture has reduced, leading to a decline in agricultural productivity, food shortages and rising prices. The ways to resolve agricultural crisis: all developing countries want to move from subsistence agriculture to market-oriented. The way to do it is to engage in agribusiness, adding value through processing and marketing. The government of Rwanda realises the role of agriculture and agribusiness to our economy, contributing 33 per cent of the GDP.”

According to the Prime Minister, “In Rwanda, we have improved in our doing business. Opening a business in Rwanda now takes only six hours, increasing the investment coming from foreign investors and joint investors in the last few years. People should move away from producing raw materials and diversify into value addition. People should irrigate the land instead of relying on the rains.”