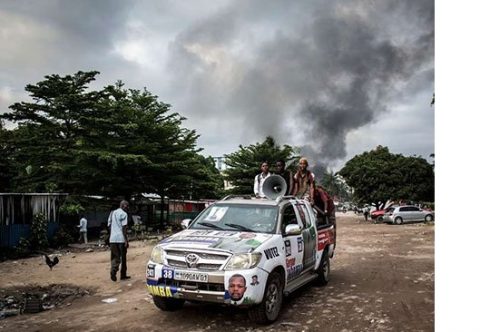 (AFRICAN EXAMINER) –  An overnight fire in a warehouse in Congo’s capital, Kinshasa, destroyed thousands of voting machines and ballot boxes that were due to be used in the Dec. 23 presidential election, a presidential adviser said on Thursday.

Barnabe Karubi said 70 per cent of the equipment due to be used for voting in Kinshasa, the capital where more than 15 per cent of Democratic Republic of Congo’s population lives, was destroyed in the fire he said had been started by “criminals’’.

Karubi said preparations for the vote, which could mark the country’s first peaceful transfer of power, would go ahead and that voting machines from elsewhere in the country would be recalled to use in Kinshasa.

He said the fire was the work of criminals and that the police who were guarding the warehouse had been arrested.

The Kinshasa police chief said forensic police were on site to investigate.

The vote to replace President Joseph Kabila, in power since 2001, was initially due to take place in 2016 but has been repeatedly delayed due to logistical and security problems. (/NAN)