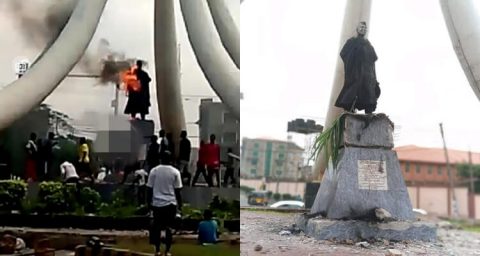 (AFRICAN EXAMINER) – A giant statue of the first Nigerian President, and the Owelle of Onitsha, late Dr. Nnamdi Azikiwe, was on Saturday completely set ablaze by some rampaging hoodlums infiltrating #EndSARS protesters in the Commercial city of Anambra state, South- East Nigeria.

Our correspondent, learnt that the statue located at Denis Memorial Grammar School Roundabout, Awka Avenue, Onitsha, known as Zik Roundabout was destroyed by the hoodlums who have been going about setting both government and private individuals facilities on fire since the protest started.

The perpetrators were said to be accusing the late political guru of being responsible for the present mess the nation finds itself, following his propagation of one Nigeria.

As they were vandalising the effigy, the hoodlums were shouting on top of their voices, “You put us in this mess by championing one Nigeria.” “You are the cause of our trouble.”

Speaking to newsmen, on the ugly incident, a member of the late former Nigeria’s president family, who identified himself as Mr. Victor Ononye, Azikiwe, described the incident as sacrilegious.

According to him “the Right Hon. Dr. Nnamdi Benjamin Azikiwe, the first President of Federal Republic of Nigeria, must be expressing regrets wherever his spirit is, for attracting independence to Nigeria.

He said: “What happened at the DMGS Roundabout, Onitsha, which I saw with my own eyes evoked tears. Miscreants, hoodlums, gutter snippers, loafers, charlatans, nitwits, nincompoops and bastards besieged the statue, hung a used tyre on his neck, poured petrol and set it on fire.

“They decapitated his hand and went away with his title staff. That was the height of ingratitude by the bastards who are ignorant of history.

“They descended on the various items used for decoration of the site and tore them to pieces. They were few in number. Why the police, who were a stone’s throw away to the roundabout, could not intervene was a mystery” he said.

“I saw two vigilante men brandishing rifles and riding on a motorcycle. They stopped and the boys hailed them and they drove off.

Meanwhile, some residents of the commercial city who spoke on the development under condition of anonymity condemned it in its entirety, saying the perpetrators many not know that they have incurred curses unto themselves.

They described the action as mother of all sacrileges, stressing that all those involved in the barbaric act would definitely pay for it.

As at the time of filing this report, the Anambra state government has not made any statement concerning the uncivilized action.