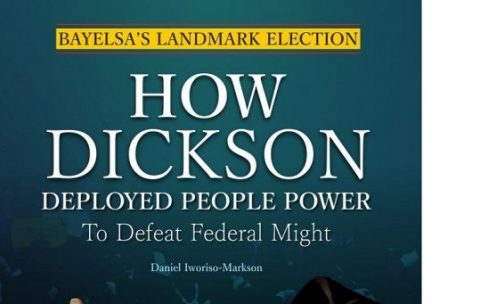 (AFRICAN EXAMINER) – About one week after it was unveiled and presented to the public in Yenagoa by Governor Henry Seriake Dickson of Bayelsa State, a new book entitled:  “Bayelsa’s Landmark Election: How Governor Dickson Deployed People Power to Defeat Federal Might”, has been released.

The book was reviewed by Dr. Rueben Abati, a former spokesperson of ex-President Goodluck Jonathan.

The book, written by the Chief Press Secretary to Bayelsa State Governor, Daniel Iworiso-Markson, chronicles the various issues of the last governorship election in the state, stating in specific terms the roles of the various actors and institutions and the defining moments.

A statement issued n Wednesday by its Marketing/Sales Consultant, Julie Olanipekun, on behalf of its publishers and made available to journalists in Lagos, gives an insight on the governorship election which, it claimed, actually challenged the soul of our democracy.

The Governor of Ekiti State, Dr. Peter Ayo Fayose wrote the foreword, putting the controversial issues which characterized the election into perspectives.

Olanipekun said that the book is a collector’s item situating the dynamics which shaped the election and why the outcome could not have been different in spite of the actions of very powerful state actors to shortchange the will of the people.

“We came face-to-face with the complex issues of our democracy and especially the elite factor as we also put into context the tortuous road ahead of our democratization journey. It is a book for all politics aficionados, including students of politics and leadership, public administration and those who want to know about the critical issues in public policy and implementation. It is also an important book for the active politicians to learn political strategy, teachers and public administrators”, the publishers stated.

With a full colour and glossy print, the book highlights such topics as: what does it mean to experience a war-like situation in an electoral democracy, why the community-to-community campaign (retail campaign), why the violence in that election, why the first inconclusive election, can the Bayelsa  people-centred model as designed by the Restoration Government be a workable model for the entire country, what is the future of democracy in the state and in the nation at large, and of course the important focus on the legacy of Governor Seriake Dickson.

“It is an inspiring narrative which combines practical political experience on the field with journalistic reportage and analysis, founded on some basic ideals of democracy. All the shenanigans which make our politics look dirty are exposed in the book as I also tried so hard to proffer some workable solutions, I believe, for the future of our democracy: enthroning discipline, playing by the rules, rethinking our federalism model and thereby enhancing meritocracy, economic development and national stability”.

Copies of the book, it is stated, are available in both paper back and hard copies across the country.