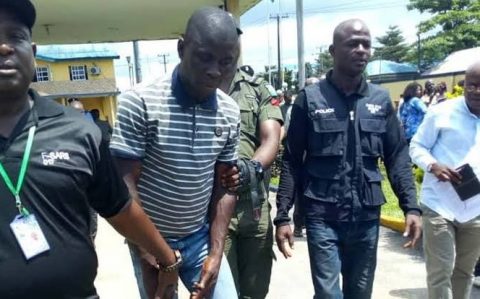 Presiding Judge, Justice Adolphus Enebele, while delivering his judgement which came six months after trial, said the suspect was convicted of the murder of eleven young women and attempted murder of a prospective victim identified as Benita Etim in a hotel in 2019.

Justice Enebele stated that the prosecution team was able to convince the court that David-West actually killed all eleven women at various hotel rooms in Port Harcourt and other parts of the state.

The court however discharged and acquitted the second defendant in the case, Nimi ThankGod, who faced one count of misconduct with the corpse of one of David-West’s victims.

Recall that David-West, who was arrested and paraded by the police in September 2019, confessed to killing seven young women; one in Lagos State, one in Owerri, Imo State, and five others in Rivers State.

Counsel to David-West, Vincent Chukwu, in his plea of allocutus on behalf of his client, pleaded for leniency on the grounds that his client is a father of three children.

However, the state prosecuting counsel led by Chidi Ekeh, said the 1st defendant (David-West) didn’t deserve any leniency and urged the court to ensure justice in the matter.

Speaking with journalists outside the courtroom, Ekeh said the judgement would serve as a deterrent to other persons with such criminal, pointing out that the 2nd defendant was freed because it was difficult to prove to the court that the accused committed the crime.

“With respect to the 2nd defendant, she escaped by the whiskers, not that the offence with which she was charged was not committed.

“But it was difficult to determine who exactly did it as the witnesses who would have ordinarily provided that answer suddenly disappeared from the state until date.

“I am happy that this judgment was given. It would serve as a deterrent to all persons with such disposition to know that there are consequences’’ the prosecutor said.

On his part, David-West’s Counsel said he will appeal against the judgment./The Punch