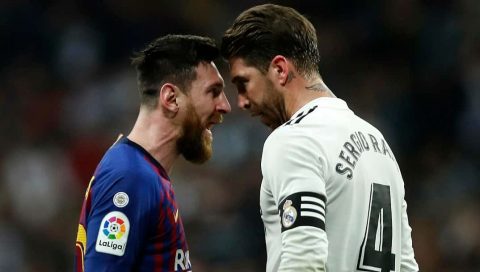 The African Examiner recalls that the Argentine captain had informed the club of his exit as he plans to reunite with former manager, Pep Guardiola.

This development has sparked reactions as the club intends to keep the Argentine for another year saying that any club who intends to keep Messi will have to pay the release clause.

Reacting to this, Sergio Ramos while speaking in a news conference ahead of Spain’s UEFA Nations League game with Germany says that both Barcelona and La Liga will like the Argentine to stay at the club.

He said: “I think [Messi] has earned the respect to decide his future.

“I do not know if he is doing it in the best way. But of course, for Spanish football, for Barcelona and for us, we always like to win being the best. We would like him to stay here.

“Leo makes the Spanish league better, he makes his team better, and he makes the Clasico more attractive.

“We like to win with the best there, and he’s one of the best in the world. There is not much to add, he has won the respect to decide his future, him alone, without any speculation at all. Let’s see what happens.”