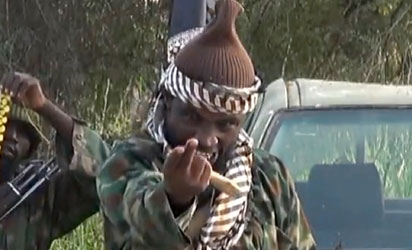 BALTIMORE, MD (AFRICAN EXAMINER) – The elusive Boko Haram Head Abubakar Shekau has again hit back at the Federal Government (FG), faulting the claim that the insurgents have been routed from its Sambisa haven in Borno State.

Shekau in a new 25-minutes video clip on youtube, released Thursday said the Nigerian Army and President Muhammadu Buhari lied to have declared that the Boko Haram fighters have been decimated and totally ousted from the Sambisa forest.

The terrorists’ Leader who spoke both in Hausa and Arabic in the video contended and queried: ‘’If you indeed crushed us, how can you see me like this? How many times have you killed us in your bogus death?”

Shekau insisted that the insurgents still exists, although did not disclose his location, vowing that they could not be captured except if it was destined so.

It would be recalled that the Nigerian Army disclosed that it has discovered the Quran used by Shekau and pledged to present them to President Buhari. The Military has also announced that it would convert the captured Sambisa forest to a training facility.