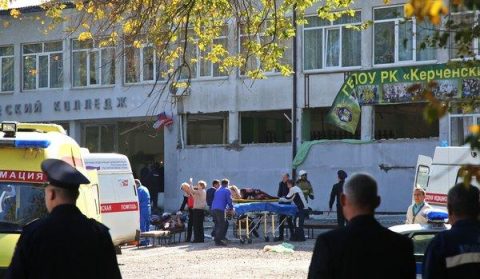 (AFRICAN EXAMINER) – No fewer than 19 people have been killed and dozens wounded in a shooting at a college in Russian-annexed Crimea.

Russian investigators alleged that an 18-year-old student Vladislav Roslyakov, ran through the technical college in Kerch firing at fellow pupils before killing himself.

Officials and witnesses also confirmed that at least, one blast caused by an unidentified explosive device.

Russia seized Crimea from Ukraine in 2014 in a move condemned by many Western powers.

The annexation marked the start of a simmering conflict involving Russian-backed rebels in eastern Ukraine that goes on to this day.

Further details are still emerging and there are contradictory reports about the chronology of the attack.

The alleged perpetrator is said to have run from room to room as he fired, starting in the area near canteen. He then shot himself dead, Russia’s investigative committee said.