Terrorism: One Suicide Bomber Killed, Many Vehicles Destroyed in Maiduguri 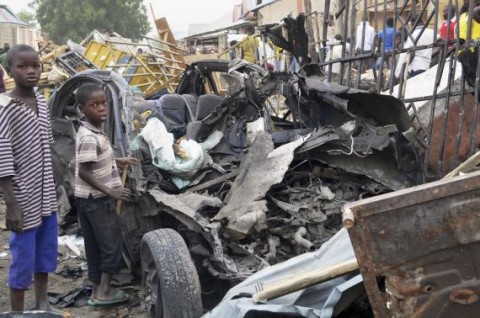 MAIDUGURI, BORNO, NIGERIA (AFRICAN EXAMINER) – The Borno Police Command confirmed Friday that a suspected suicide bomber detonated his explosive in the midst of 13 trucks along Maiduguri/ Mafa road leading to death of the suspected terrorist and mass destruction.

The Command Spokesman Mr. Victor Isuku, said this in a statement in Maiduguri, the Borno State capital.

“On Thursday a suicide bomber sneaked into the midst of 13 pick-up trucks loaded with goods along Maiduguri/Mafa road, said to be awaiting departure to Gamboru Ngala in the early hours of Friday.

“He detonated an Improvised Explosive Devise (IED) strapped on his body,” Isuku said.

According to Isuku, only the bomber was killed during the incident as the vehicles parked