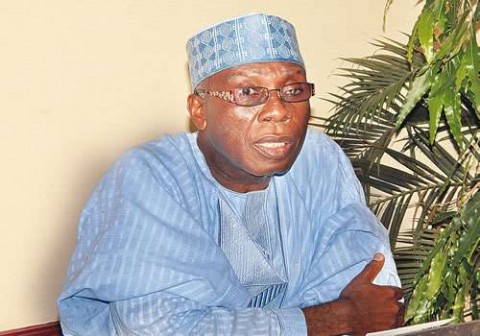 (AFRICAN EXAMINER) – Arguing that deliberate misinformation to the public on major governmental policies and programmes has the capacity to attract international opprobrium on the global image of Nigeria and misdirect millions of Nigeria children to glamourize lying, a group HUMAN RIGHTS WRITERS ASSOCIATION OF NIGERIA (HURIWA) has asked President Muhammadu Buhari to fire his cabinet members with alleged proven notoriety for allegedly lying tongue-in-cheek.

A prominent pro-democracy and Non-governmental organization – HUMAN RIGHTS WRITERS ASSOCIATION OF NIGERIA (HURIWA) specifically listed the octogenarian Agriculture Minister Mr. Audu Ogbeh and the information minister Alhaji Lai Mohammed as those to be fired for being widely perceived as willfully being economical with the truth in the discharge of their public functions thereby polluting the innocent minds of Nigerian Children even as disseminating false information violates the criminal code Act of Nigeria.

In a statement signed by the National Coordinator Comrade Emmanuel Onwubiko and the National Media Affairs Director Miss Zainab Yusuf, HURIWA affirmed that the duo of Mr. Ogbeh and Lai Mohammed have through their habitual spreading of misinformation if not checkmated through outright dismissal, are capable of eroding national ethics and could twist the impressionistic minds of Nigerian children to believe that deliberate spreading of alleged falsehoods has no consequences.

Specifically, HURIWA condemned the Agriculture Minister for exposing the global image of Nigeria to disrepute by dishing out information on the rice industry of Thailand which empirically has been dismissed as outright falsehood even as the Ambassador of Thailand to Nigeria has further escalated the scandal by accusing the nation’s Agriculture Minister of spreading false information to the public.

HURIWA has therefore charged president Buhari to at least suspend the Agriculture Minister from office and carry out further investigation within seven days on the veracity of his claims that Rice factories in Thailand closed down because the current government in Nigeria suddenly made rice production in Nigeria a big industry.

“We believe that Mr. President must suspend the Agriculture Minister pending further timely investigation and to order his sack eventually if contrary opinions alleging that he lied are proven as truth. The Nigerian law book even has legal sanction for providing false information and since the law is not a respecter of status or a class, the minister of Agriculture and information must be made to face the consequences of willful misinformation.”

HURIWA stated that a report credited to the information minister that the Nigerian Air Force deployed 100 Military Jets to chase after the boko haram terrorists who abducted 104 girls from a science school in Dapche, Yobe state was publicly denied by the officials of the chief of Air Staff’s media office who said contrary to the falsehood what was correct was 100 sorties and not 100 Jets.

“The current President has claimed to be a man of honesty and so Nigerians are disappointed that his cabinet members have lied to Nigerians in not less than 10,000 times documented in media reports with the current controversy involving the Agriculture and Information Ministers being the most disgraceful acts of alleged betrayal of truth and public trust and amounts to criminal violation.”

Specifically, criminal code in section”125A subsection (1)  affirms that: “Any individual who gives any information which he knows or believes to be false, to any person employed in the public service with the intention of causing such person- (a) to do or omit to do anything which such person ought not to do or ought not to omit to do if the true facts concerning the information given were known to such person; or (b) to exercise or use his lawful powers as a person employed in the public service to the injury or annoyance of any other person, is guilty of an offence and liable to imprisonment for one year.”

HURIWA recalled that Mr. Wattana Kunwongse, ambassador of Thailand to Nigeria, had publicly denied the claim of Audu Ogbeh, minister of agriculture, that rice mills are collapsing in the Asian country.

On Friday, Ogbeh had claimed that Thailand said President Muhammadu Buhari’s policy on local rice sufficiency was responsible for the collapse of seven of its mills.

HURIWA recalled Mr Audu Ogbe as stating thus: “Just like two weeks ago, the ambassador of Thailand came to my office and said to me that we have really dealt with them. But I asked what did we do wrong and he said unemployment in Thailand was one of the lowest in the world, 1.2 percent, it has gone up to four percent because seven giant rice mills have shut down because Nigeria’s import has fallen by 95 per cent on rice alone.”

But HURIWA recalled that the Cable online newspaper fact-checked the minister’s claims and found them to be false.

HURIWA recalled that according to a statement published by Premium Times on Tuesday, Kunwongse said there is no proof of the shutdown of Thailand’s major mills.

HURIWA cited media report as claiming that the ambassador said that at the meeting, he praised the government’s Economic Recovery and Growth Plan (ERGP) and assured the minister of Thailand’s support in the field of agriculture.

HURIWA recalled that the Ambassador further asserted that: “The report is not only misleading but a distortion of the actual conversation between myself and the honourable minister of agriculture at the federal ministry of agriculture and rural development on 30th January 2018, which was nothing short of positivity and optimism on both sides,” the statement read.

HURIWA said the Thailand’s Envoy stated thus: “During which I praised President Buhari’s Economic Recovery and Growth Plan (ERGP), the essence of which is the endeavour to move the country to a self-sufficiency and export-oriented economy, and to that worthy cause, Thailand stands ready to work closely with the Nigerian government in the field of technological transfer and agricultural machineries.”At the same meeting, the honourable minister and I had reached the conclusion that I as ambassador of Thailand to Nigeria will be working closely with the Ministry of Agriculture and rural development to establish a platform to discuss our mutual benefits in the form of MOU on Agricultural Cooperation and by forming a bilateral Working Committee toward that end.”

The Ambassador said: “Thailand’s rice export to the world in 20 (January-December 2017) reached 11.48 million tons equalizing to $5.1 billion (USD), a 15.54 per cent increase compared to previous years, which is one of the highest figures on the history Thailand’s rice exportation.”There is no proof of any shutdown of Thailand’s major rice mills.”