This day, the World Champion Goes Home, By Owei Lakemfa 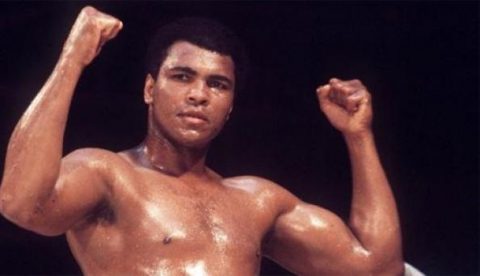 BALTIMORE, MD (AFRICAN EXAMINER) – Today, the World Champion, Mohammed Ali will be laid to eternal rest. Exactly a week ago, the greatest sportsperson ever, was eternally knocked out.  He was the world champion on and off the ring fighting and winning bouts against injustice, racism, religious discrimination and  warmongering. He became the very symbol of what was boxing, so much that when he left, the game  suffered. He carried the hopes of millions of people into the ring. To the lowly and oppressed around the world, he was their champion. To him, boxing was not just sports or a profession; it was an elongation of American and world politics; a political struggle between the strong and the weak. Whipping some of his opponents in the ring, was like lashing the American establishment and their collaborators.

Ali’s  greatest victory was popularizing boxing and using it for popular causes. With his mesmerizing footwork which reminded one of the displays of James Brown and Michael Jackson on stage, he  transformed boxing into an art. With Ali, boxing became a mass entertainment; so much that even ordinary folks poured  out into the streets as early as 2am to chant songs in his praise as was the case in Zaire and many parts of Africa including Nigeria in 1974.

From him, boxing sprouted poetry like  “Float like a butterfly, sting like a bee. The hands can’t hit what the eyes can’t see.” Indeed, he was so fast that many of his opponents and even people at the ring side didn’t see some of his most devastating blows. For instance which blow fell the mountain, Sonny Liston or rugged George Foreman in the October 30, 1974 Rumble in the Jungle? He joked  about his lightening speed “I’m so fast that last night I turned off the light switch in my hotel room and was in bed before the room was dark.”

He turned boxing into a science  by mapping out every inch of the ring, measuring his steps as well as those of his opponents. To him, boxing was like a guerrilla warfare; he withdrew when his opponents attacked, and attacked when they tire. This system which he perfected in the Foreman fight, he called ‘Rope-a-dope’ He had been scientific all along without the world realizing it. For instance, when he announced the round otherwise tough opponents would fall,  and they did, he wasn’t being prophetic or mere talkative. What he did was study each opponent including their  strength and weaknesses, style and ability to deliver and absorb blows, and compared them with his. He then taunted and psychologically  assaulted them  before and during the fights. The result in many instances was that he was able, with slight margins of error, to predict the outcome of his fights. Sure he needed courage to surmount what seemed impossible such as a 22-year old boxer taking on a fearsome  champion like Sonny Liston who had knocked out very strong opponents including  world champion Floyd Patterson within two rounds. But to Ali, nothing was impossible as “Impossible is just a big word thrown around by small men who find it easier to live in the world they’ve been given than to explore the power they have to change it. Impossible is not a fact. It’s an opinion. Impossible is not a declaration. It’s a dare. Impossible is potential. Impossible is temporary. Impossible is nothing.”

Ali also turned the sport into political rallies where proponents and opponents  of particular political causes like the war in Vietnam, gathered to spur on those they support. For instance, it was a sacrilege  and criminal for an American  citizen to refuse a call up to serve his country no matter how wrong the establishment could be. But Ali challenged that  at great financial and personal costs including imprisonment, when he refused the call up to fight in Vietnam. He was to articulate an unassailable philosophy on wars when he said “Wars of nations are fought to change maps. But wars of poverty are fought to map change”

On February 17, 1966 in rejecting the call up join the American Military in the criminal war in Vietnam, Ali argued “Why should they ask me to put on a uniform and go 10,000 miles from home and drop bombs and bullets on Brown people in Vietnam while so-called Negro people in Louisville are treated like dogs and denied simple human rights?… I will not disgrace my religion, my people or myself by becoming a tool to enslave those who are fighting for their own justice, freedom and equality.”

Ali knew his refusal to answer the call to enlist in the Vietnamese war would cost him millions of dollars, backlash from the establishment, ban from boxing and a likely jail term. But he was ready to risk all for his beliefs and the sake of the oppressed. He was to say “You lose nothing when fighting for a cause … In my mind the losers are those who don’t have a cause they care about.”

Before his battle against the Vietnamese war, he had taken other risks such as joining the   Black Muslims (The Nation of Islam)  which wanted a separate country for African Americans with capital in Chicago, and being publicly identified with Brother Malcolm X seen at that time as the greatest threat to  America. Malcom X who had been fundamental in converting  Ali to Islam, had also made moves to drag the United States before the United Nations for hundreds of years of crimes against the Black people.

Ali was unapologetic about the choices he made even where they offended his country’s establishment. For him, he had a right to a foothold on American soil. He proclaimed  “I am America. I am the part you won’t recognize. But get used to me. Black, confident, cocky; my name, not yours; my religion, not yours; my goals, my own; get used to me.”

Given the race relations in America, when Ali proclaimed “I am the Greatest” he was making not just a bold, but also courageous statement. He proclaimed his greatness at a time when the Blackman in United States counted for little, his life did not matter and was not allowed to vote.

Despite  such pronouncements, Ali remained a humble man who connected with people all over the world. He explained his general outlook “I am an ordinary man who worked hard to develop the talent I was given. I believed in myself, and I believe in the goodness of others.”

Ali  was unmatchable,  could not be duplicated, impersonated or cloned; he will continue to live in the hearts of millions of people across the world and in history. Goodbye, the compassionate champion of the oppressed people.