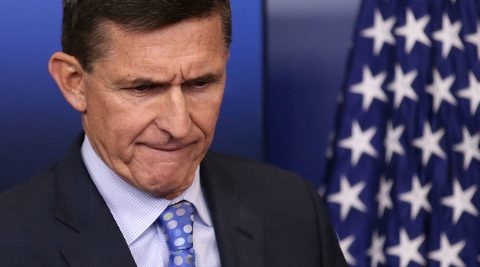 In his resignation letter, Flynn, a retired Army general, acknowledged late Monday he had “inadvertently briefed” Pence and others with “incomplete information” regarding his phone calls with the Russian ambassador to the United States in the weeks before President Donald Trump assumed power.

Such a high-level resignation less than a month after Trump took over the White House is virtually unheard of on the American political scene.

Pence and Trump aides, relying on information from Flynn, said publicly that Flynn had not discussed lifting the sanctions, which are still in place, once Trump was inaugurated January 20. Flynn later acknowledged the issue may have come up.

Conversations such as those between Flynn and Kislyak possibly could have been a violation of a U.S. law that prohibits private citizens from conducting diplomatic affairs with a foreign government, because Trump had yet to take office.

The U.S. Justice Department, according to The Washington Post, warned the White House last month that Flynn had so misrepresented his conversations with the Russian envoy that he might be vulnerable to blackmail by Moscow, as a result of the contradictions between the public descriptions of the calls and what intelligence officials knew based on their routine monitoring of communications by foreign officials in the United States.

Flynn, in his resignation letter, said he had apologized to both Trump and Pence, and that they had accepted his apology.