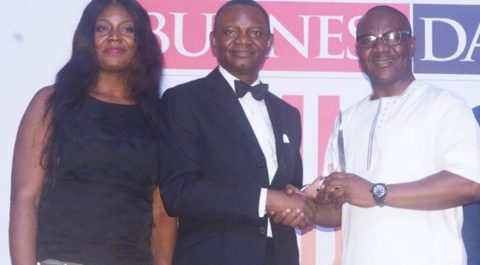 (AFRICAN EXAMINER) – Pan-African banking group, United Bank for Africa (UBA) Plc, at the weekend was recognised for its extraordinary support of the real sector as it won best bank in the category, ahead of its peers.

The award, the organisers noted is in recognition of UBA’s leadership role as in expanding access to funds for the support of the real sector in Nigeria and the rest of Africa where it operates. This feat, the organisers further said has brought about unprecedented growth to the sector and by extension, the nation’s economy and that of Africa.

Speaking while receiving the prestigious award on behalf of the bank, Head Strategic Business Group, Mr. Usman Isiaka expressed appreciation to Businessday for recognising the distinctive role, UBA is playing in Nigeria as well as the African continent in driving financial inclusion coupled with its role in supporting the growth of critical sectors.

“The Real sector is pivotal to economic development in Nigeria and all of Africa as it forms the main driving force of any economy and its development.

We are pleased with the acknowledgement of our support to the sector. It is worthy to note that our expansion to Africa has not only helped diversify our earnings base, it has provided us with the opportunity to grow economies and partake in the development of Africa. We are grateful to all stakeholders for their support and are stimulated to do even more” he said.

“We are motivated by philosophy that, Great institutions and leaders deserve to be recognised so as to boost healthy competition in their sector” that is why we make it a point of duty to celebrate those who make the conscious effort to stand out”, Aigbogun noted.

UBA was incorporated in Nigeria as a limited liability company after taking over the assets of the British and French Bank Limited who had been operating in Nigeria since 1949. The United Bank for Africa merged with Standard Trust Bank in 2005 and from a single country operation founded in 1949 in Nigeria – Africa’s largest economy – UBA has become one of the leading providers of banking and other financial services on the African continent.

The Bank provides services to over 14 million customers globally, through one of the most diverse service channels in sub-Saharan Africa, with over 1,000 branches and customer touch points and robust online and mobile banking platforms.