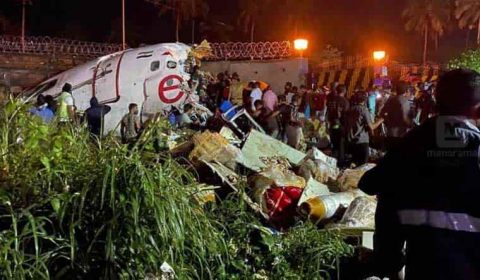 (AFRICAN EXAMINER) – No fewer than 16 people have been reportedly killed when an Air India Express plane with 191 people on board has crashed at an airport in the southern state of Kerala.

The aircraft, according to India’s aviation authority, was en route from Dubai, when it skidded off the runway and broke in two at Calicut airport upon landing.

Rescue efforts are under way, by emergency responders at the scene.

In his early reaction, Indian Prime Minister Narendra Modi said he was “pained by the plane accident”.

A lawmaker from Calicut, MK Raghavan was quoted as confirming that not less than 16 people have died in the crash.

Most passengers on board the Boeing 737 jet have been evacuated, with at least 35 of them taken to hospital with injuries.

The airline confirmed that there were 184 passengers – including 10 children and seven crew members, of which two were pilots – on board flight IX-1344 when it crashed at Calicut, also known as Kozhikode.

The flight was being operated by the government to repatriate Indians stuck overseas during the coronavirus crisis.

Meanwhile, the Directorate General of Civil Aviation (DGCA) said the plane fell into a valley and broke in into two, after skidding off the end of the runway.

DGCA also confirmed that no fire was reported at the time of landing.

Images made available showed the aircraft broken in two pieces, with people still searching through the wreckage.