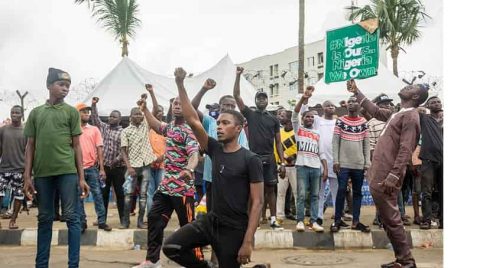 (AFRICAN EXAMINER) – Amidst the ongoing #EndSARS protests in Nigeria, the Centre for Human Rights, University of Pretoria in South Africa has lent its voice to the call for a holistic reform of the Nigerian policing system.

The nationwide protest was triggered by call for the disbandment of the Special Anti-Robbery Squad (SARS), a tactical unit within the NPF designed to tackle incidents of armed robbery in Nigeria.

Although SARS has been disbanded by the Federal Government of Nigeria, yet the protesters are demanding for more reforms in the entire governance structure of the country.

Moreover, the government institutions responsible for the implementation of these pronouncements of the government have not converted these promises into actual change. Disappointment about the lack of action and a deep distrust of government explain the ongoing protests calling for a lasting reform of the NPF, despite the announcement by the Nigerian authorities that the unit has been disbanded.

According to the centre, it is of serious concern that the Nigerian government and the Police have responded to the ongoing demonstrations through further acts of police brutality that have resulted in the loss of lives of protesters, unlawful detention of protesters and disruption of peaceful protests.

The centre in statement jointly signed by Foluso Adegalu, a Researcher in the Litigation and Implementation Unit and Omotunde Enigbokan, a Project Officer in the Migration Clinic and  Research Assistant, called on the Nigerian government to put an immediate end to the ongoing acts of police brutality against peaceful protesters and allow protesters to continue the lawful exercise of their rights to peaceful protest.

The centre also urged the government to conduct impartial, independent, and transparent investigations into acts of police brutality and hold the culpable officers accountable through disciplinary punishment or criminal prosecutions.

The statement observed that the acts of police brutality are against international human rights treaties that Nigeria has ratified, in particular the International Covenant on Civil and Political Rights and the African Charter on Human and Peoples’ Rights.

“The above instruments protect the right to life, the right against torture and other cruel, inhuman or degrading treatments, the right to peaceful assembly and mandate that the dignity of every individual is respected”, the statement added.

It further pointed out that Chapter 4 of the 1999 Constitution of the Federal Republic of Nigeria (as amended) provides for various fundamental rights, including the rights to life, human dignity, personal liberty, privacy, freedom of expression and the press, freedom of assembly, and association.

The statement noted that the Nigerian government is therefore duty bound to ensure that the rights of citizens guaranteed under chapter 4 of the Nigerian Constitution are protected at all times, including during peaceful protest.

It also explained that the African Commission on Human and Peoples’ Rights in General Comment No 3 on the right to life, states that the primary duty of law enforcement officials is to protect the safety of the public.

The African Commission, according to the statement, enjoins States to take all reasonable precautionary steps to protect life and prevent excessive use of force by its agents, including the provision of appropriate equipment and training as well as, wherever possible, careful planning of individual operations.

“Additionally, States must adopt a clear legislative framework for the use of force by law-enforcement and other actors that complies with international standards, including the principles of necessity and proportionality”, it further disclosed.