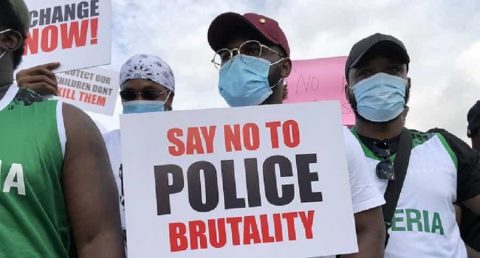 (AFRICAN EXAMINER) – Social media have been set abuzz concerning the oath of secrecy issued to the representatives of the youths in the ongoing judicial panel probing the disbanded Special Anti-Robbery Squad (SARS).

African Examiner recalls that the Lagos Panel of Enquiry and Restitution for Victims was constituted by Governor Babajide Sanwo-Olu and the Lekki toll gate shooting incident is also among the issues the panel will look into.

Rinu Oduala and Temitope Majekodunmi are the representatives of the youths in the judicial panel.

They were given the oath of secrecy to sign and it was leaked to the internet and many Nigerians are upset concerning the development.

The African Examiner brings some of their views below:

Lagos Landord and 36 Tenants GCFR@chiefagbabiaka_ writes: “Wait ooo so the Independent judicial panel members are swearing oath of secrecy to @jidesanwoolu for a public hearing? there is more to this. Gbogbo eleyi ko necessary now Gomina abi you people are scared ni #LagosJudicialPanel #PoliceBrutality #LekkiMassacre #EndSARS.”

The Equaliser@TheDilichi writes: “If it is a public hearing, why are representatives of the people being made to sign an “oath of secrecy” to Sanwo Olu??? Why should they not speak?? is it rituals they are going for??”

#LFC… #EndSars@Bajgop07 writes: “Let no representative of the #EndSARS movement sign any oath of secrecy pls. We are in for transperancy and not secret.”

Count Lustwig II 🅒@Lord_of_Saarl writes: “Panel never start you are already being served “Oath of Secrecy”… You don’t know it’s representatives we sent in there not politicians. If a pin drops, They must describe the sound. The people who were injured, killed and battered were done in public not in secret.”

The Equaliser@TheDilichi writes: “Sanwo Olu is always shady with his dealings. Judicial Panel for public hearing but you want the members to sign an Oath of Secrecy so whatever is said inside does not get out. These people don’t rate us one bit.”

FESTUS OGUN@mrfestusogun writes: “This is shamefully wrong. The Panel of Inquiry is not a secret society. Discussions & resolutions should be common knowledge of the public. Again, the repetitive reference to the Governor is worrying. Loyalty is to the State. Everything is wrong with this. Are we okay at all?”

#BLACKTUESDAY The Precious One@damiancaring writes: “While I know confidentiality gag exist for those in higher positions in Private org & Public office, the Oath of Secrecy is a new LOW by Sanwoolu. People died, some’re still in hospital & yet Panel won’t be transparent. 1 more reason to hate Nigeria & lose hope #LekkiMassacre”

Benny@BenUgbana_ writes: “That nonsense Oath of secrecy doc is everything that #Sorosoke isn’t. Whoever came up with the document definitely had no idea the kind of people they were dealing with.”

20/10/2020 @Haanaatu writes: “why should they swear oath of secrecy to you? @jidesanwoolu . Go and answer to the panel and may all lies dissolve from your mouth in time.”

Olumide columnist @columnist_ng writes: “A judicial panel on #EndSARS should not only be independent but be very open. The introduction of an oath of secrecy is another effort by @jidesanwoolu led govt to compromise justice and this should be condemned outrightly and resisted by members of the public. #LekkiMassacre.”

Laralagos@lahrah_x writes: “Oath of secrecy on a public panel???”

òśòYínkà@sledge_baba writes: “It’s a public panel, What’s the oath of secrecy for? What are these people desperately trying to hide? It’s a sitting not a cult initiation.”

#EndSARS @Apholerbee writes: “”Oath of Secrecy” who are they hiding the proceedings from? The Youths that are demanding justice & transparency or their opposition? Dear Mr.@jidesanwoolu the IDGAF attitude y’all did that led to #LekkiMassacre won’t be tolerated again. In a simpler term, what’s the OATH for?”

Vj Taste@MICriffraff writes: “Why Oath of secrecy? So you can cage and also manipulate them… E no go work.”