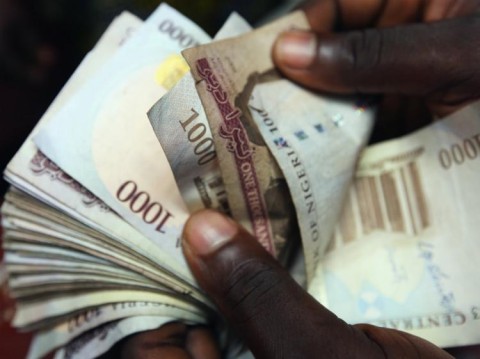 The floated Nigeria’s naira that has been pegged at 197-199 to a dollar lost over 40 percent of its value on the first day of trading.  Unofficial reordered statistics on first day of naira outing revealed that naira was traded as low as 265 to a dollar and at one point nosedived to 288 to a dollar as naira continued to devalue and losing its purchasing power.  The Central Bank of Nigeria (CBN) has not released the official statistics of the currency trading.

So far, CBN has auctioned S4 billion on the first day of floating naira, proceeding with $100 million sold in the interbank liquidity market. The real value of naira has not been determined as naira continues to plummet.
The devaluation of naira will make Nigerians poorer especially wealthy individuals and companies because their wealth was determined by the discarded pegged naira.

Bloomberg stated that “the central bank started auctioning dollars in the spot and forwards markets around midday to try and clear a backlog of orders for hard currency, according to a person with knowledge of the
transactions who asked not to be identified as the information isn’t public. While the size of the auction wasn’t disclosed, the backlog is around $3 billion to $4 billion, according to analysts at Lagos-based investment bank Chapel Hill Securities Ltd.”

The mechanics of naira floating as stipulated by CBN was not wholly based on the forces of the market as otherwise conveyed to the public by CBN.

There are certain exceptions and regulations that undermined the integrity of the determinant forces of market as oppose to the law of demand and supply.

The CBN has the power to intervene in the trading when it deem necessary. The CBN may choose to shut the trading or delayed the process when it anticipates abnormalities of over pricing, imposing clutches as it began
to run out of dollars.

CBN has selective dealers mostly banks who can participate in the bidding, thereby shutting out the general public from direct participation.

The CBN has restricted or out rightly banned 41 products from not getting allocation for their importation. These restricted materials including toothpicks, milk, tomatoes, airplane, rice and other essential materials that are expected to be made in Nigeria. In some cases, the restricting of allocation for purchase of airplane is logical but some essential food products like rice and tomato paste should be reconsidered.

Many Nigerian businesses and industries will not gain any advantage from the naira devaluation because they hardly export their products abroad. Moreover, they purchase finish and raw materials from outside the country.
One thing for sure, devaluation will discourage importation, even though that the indigenous industries are incapable of producing those materials that the local consumers needed. The price of energy, undeveloped
infrastructures and poor industrial policy hammered modern day industrialization in Nigeria.

“The devaluation is a boon for MTN, Africa’s largest telecommunications company, which this month negotiated a deal to pay a fine of 330 billion naira, now effectively discounted by about 30 percent. Among losers are companies with billions of naira trapped in Nigeria that they were not allowed to repatriate. Analysts said the devaluation could exacerbate bad debts already standing at 10 percent of bank loans. Bankers will adjust
loans made in dollars to the new value of the naira, including more than $10 billion loaned to Nigerian companies to buy assets from oil multinationals in recent years,” as noted by Associated Press.

Wall Street Journal analysts forecasted the long time fate of naira: “Based on the naira’s exchange rate in black-market trading, it might continue falling until it loses as much as 70% of its value against the dollar, traders say.”

CBN  have been quoted that the back orders for  dollar demand has been cleared. But the starved market for hard currency in Nigeria maybe insatiable. The auction of dollar on market demand may not be sustainable
due to low price of oil and lower quantity of crude oil export.

Emeka  Chiakwelu, Principal Policy Strategist at AFRIPOL. His works have appeared in Wall Street Journal, Huffington Post, Forbes and many other important journals around the world. His writings have also been cited in many economic books, publications and many institutions of higher learning including tagteam Harvard Education. Africa Political & Economic Strategic Center (AFRIPOL) is foremost a public policy center whose fundamental objective is to broaden the parameters of public policy debates in Africa. To advocate, promote and encourage free enterprise, democracy, sustainablegreen environment, human rights, conflict resolutions, transparency and probity in Africa.   info@afripol.org       www.afripol.org