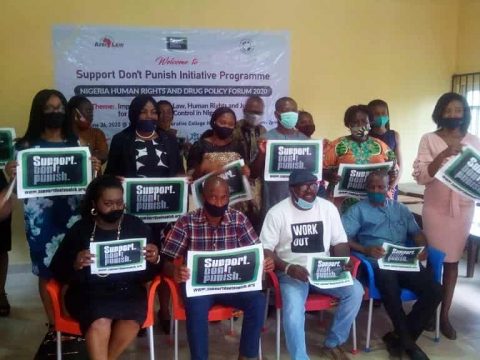 (AFRICAN EXAMINER) – Human rights groups and other stakeholders have stressed the need for urgent review of Nigerian laws on drug offences with a view to decriminalising and ensuring best global practices.

They argued that the existing  Nigerian laws as it relates to drug offences do not have a place for human rights compliance as obtained elsewhere in Africa, including Ghana, insisting that the only way out was for a review of such laws.

The stakeholders who spoke in Enugu frowned at a situation where the existing laws criminalize drug offences thereby subjecting suspected offenders to all forms of human rights abuses, including, extortion, extra-legal arrests, torture, forced confessions, denial of legal services, stigmatization and dehumanisation.

The ceremony  with the theme, “Improving Rule of Law, Human Rights and Justice for Effective Drug Control in Nigeria”, was also part of events to mark this year’s International Day Against Drug Abuse and Illicit Trafficking, a United Nation’s programme observed annually on 26 June, since 1989.

In his remarks at the event, Enugu state office Coordinator of NHRC, Dr. Valentine Madubuko posited that drug users are sick people and need treatment and rehabilitation, since they also have right to health.

Represented by Mr. Ezeani Iheukwumere, an Assistant Director Corporate Affairs and External Linkages of NHRC, Dr. Madubuko alleged that some suspected drug offenders are extra legally arrested, tortured, sexually abused and sometimes spend up to 10 years in prison without trial.

He disclosed that NHRC “in conjunction with West African Commission on Drugs are working to ensure regional governments create drug policies to protect human rights.”

Convener of the event and Executive Director of (Afrilaw) Foundation, Barrister Chinwike Okereke, noted  that before now most people see drug use as a criminal offence, which he said was not surprising going by NDLEA Law, Indian Hemp Act and other international conventions which Nigeria was signatory to, and which criminalise drugs.

He said: “And enforcement of drug laws, which prescribes 5 to 25 years imprisonment, comes with unintended consequences. Human rights seek to safeguard the dignity of people and equity and fair treatment,” he said.

He explained that 14.4 percent or 14.3 million Nigerians use drugs, which he defined as a substance/chemical which when taken into the body alters the body’s function either physically and/or psychologically.

“Some drugs can be used therapeutically, meaning that some of the drugs have medical values.