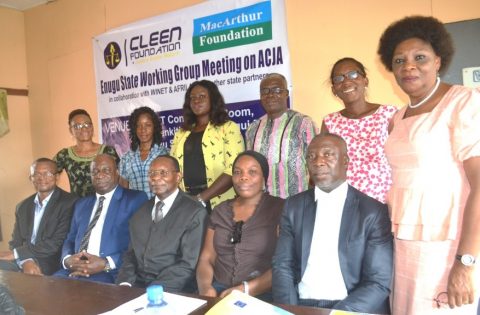 (AFRICAN EXAMINER) – The Independent Corrupt Practices and Other Related Offences Commission (ICPC) has called for proper implementation of the Administration of Criminal Justice Act (ACJA) 2015 and the Enugu State Administration of Justice Criminal Law (AJCL) 2017.

Our correspondent reports that the working group is being coordinated by an Enugu based non government organization NGO, Women Information Network (WINET) in collaboration with CLEEN Foundation and sponsored by MacArthur Foundation.

According to the ICPC Zonal head both the law and the Act are very crucial as they have provisions for speedy trial of criminal cases and enhancement of the judicial process in the Nigeria.

He however, regretted that some of the provisions were not being implemented in a manner that could lead to the realization of the desired ends, saying “for instance, the act and the law prohibit arrest in lieu of a suspect, but the practice appears to be persisting due to lack of monitoring” .

Speaking on the Implementation of ACJA 2015 and Enugu State ACJL 2017-Milestones, Challenges and the Way Forward, the ICPC Zonal boss wondered whether Witness Support Units provided for to take care of expenses of witnesses were in place and funded, stressing that it was not proper for witness to the state in a criminal case to incur personal expenses.

He equally picked holes on the  provisions of the Act and Law that criminal cases should be heard daily and that fine should be imposed if adjournment was at the instance of the prosecutor.

Mr. Sule also argued that daily trial might not be practicable because of lack of facilities in courts for the comfort of Judges while some while some reasons for adjournment might not be the fault of the prosecutor such as in a case of murder where autopsy was required.

He applauded the Enugu State government for domesticating ACJA, but maintained that something must be done to make the state ACJL to work for the people.

The government he insisted,  should muster the political will and provide resources to deal with identified challenges while efforts should be made to address the observed lapses in the law.

In his remarks,  Mr. Innocent Mbachie of the Economic and Financial Crimes Commission  EFCC South East Zonal Office Enugu, said some good provisions of ACJA and Enugu State ACJL were observed more in breach than compliance.

He enumerated such provisions to include  the prohibition of violence, intimidation and harassment of suspects, recording of evidence on camera where the suspect did not come with a relative, loved one or counsel.

A representative of the Registrar Enugu State High Court, Mr. Osondu Chukwuani in his speech noted that most of the challenges were embedded in the Nigerian system and financial deficit, stating  that Witness Support Center inaugurated in Enugu State four years ago had not been functioning because of lack of funds, while light had been a huge problem in the in courts especially those outside the cities.

Mr. Chukwuani who is Deputy Chief Registrar 1 however said that Enugu State Government was doing all it could to see that the law was implemented for the benefit of the people with the Chief Judge providing fifty thousand naira to power electricity generating sets in the rural areas. He called for more financial intervention from the government, corporate and non-governmental organizations as well as individuals to enhance the administration of criminal justice in the state.

Chairman  of the meeting and representative of the Chief Judge of Enugu State, Chief Magistrate Jude Achi-Kanu commended the organizers of the meeting noting that such was essential for the administration of criminal justice law.

He stressed that the groups focus on computerization of court judgments, promotion of accountability and transparency in the judiciary was commendable as they were key issues in achieving the desired results.

Mr. Achi-Kanu expressed the hope that as the implementation of the law in Enugu state progresses, identified lapses would be corrected and called for the involvement of the police and prisons officials and other relevant stakeholders in future discussions on the way forward.

Earlier in her remarks, the Executive Director of Women Information Network (WINET) and facilitator of the meeting Mrs. Miriam Menkiti, , had  explained that ACJA 2015 and Enugu State ACJL 2017 working group was committed to ensuring proper implementation of the Act and Law through the promotion of accountability and transparency in the judicial system.

The meeting attended by representative of EFCC, ICPC, NYSC, FIDA, Legal Aid Council and AFRILAW among others identified other challenges facing ACJA and ACJL to include lack of vehicles to convey suspects to courts, bribery and corruption within the prison system, the police and the judiciary.

Participants therefore, advocated that Human Rights Commission, the Legal Aid Council and lawyers should be represented in police stations, while Magistrates should visit prisons regularly and have powers to grant bail to criminal suspects.