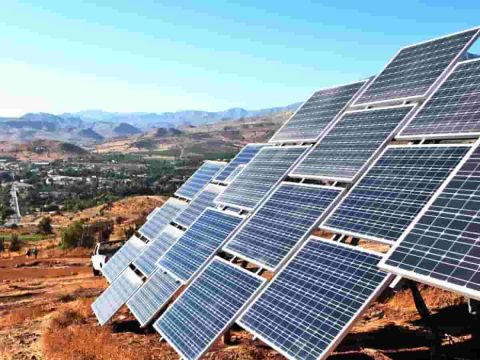 The Federal Government of Nigeria has promised to provide Solar home systems to five million Nigerian households in the next 12 months.

Nigerian President, Muhammadu Buhari who made the promise, said the intervention is part of the Economic Sustainability Plan (ESP) of the Federal Government.

This was contained in the president’ address on Monday at the commencement of the First-year Ministerial Performance Review Retreat in Abuja, where he was represented by Vice President, Yemi Osinbajo.

Buhari noted that the five million systems under the ESP’s Solar Power Strategy will produce 250,000  jobs and impact up to 25 million beneficiaries through the installation.  This, according to him, means that more Nigerians will have access to electricity via a reliable and sustainable solar system.

“We have already begun the process of providing financing support through the Central Bank of Nigeria (CBN) for manufacturers and retailers of Off Grid Solar Home Systems and Mini-Grids who are to provide the systems.

“The support to Solar Home System manufacturers and the bulk procurement of local meters will create over 300,000 local jobs while ensuring that we set Nigeria on a path to full electrification”, he said.

He said the tariff review is not about the increase, which will only affect the top electricity consumers, but establishing a system which will definitely lead to improved service for all at a fair and reasonable price.

He further noted that there has been some concern expressed about the timing of these two necessary adjustments, adding that it is important to stress that this is coincidental in the sense that the deregulation of PMS prices happened quite some time ago, it was announced on 18 March 2020 and the price moderation that took place at the beginning of this month was just part of the on-going monthly adjustments to global crude oil prices.

Similarly, the review of service-based electricity tariffs, according to him, was scheduled to start at the beginning of July but was put on hold to enable further studies and proper arrangements to be made.

“This government is not insensitive to the current economic difficulties our people  are going through and the very tough economic situation we face as a nation, and we certainly will not inflict hardship on our people. But we are convinced that if we stay focused on our plans, a brighter and more prosperous days will come soon.

“Ministers and senior officials must accordingly ensure the vigorous and prompt implementation of the ESP and all of our programmes, which will give succour to Nigerians”, he added.

The president further explained in order to alleviate the economic hardship, the CBN has created credit facilities of up to N100 billion for the Healthcare and N1 trillion for  the   Manufacturing sectors.

“From January, 2020 to date, over N191.87 billion has already been disbursed for 76 real sectors projects under the N1 trillion Real Sector Scheme; while 34 Healthcare projects have been funded to the tune of N37.159 billion under the Healthcare Sector Intervention Facility.

“The facilities are meant to address some of the infrastructural gap in the healthcare and manufacturing sector as a fall out to the COVID-19 pandemic and to facilitate the attainment of the Government’s 5-year strategic plan”, he stressed.

Buhari said the retreat was conceived and designed to address the current economic challenges and consolidate on the achievements of the present administration over the past year.

He added that the retreat is also expected to review the performance of each Minister in delivering the priority mandates, including programmes and projects assigned to them upon their appointment in 2019, identify key impediments to implementation and re-strategize on how to accelerate delivery of results, given the current economic situation.

“The retreat would also provide the opportunity to effectively evaluate the activities of the Ministries over the last twelve months with regard to the delivery of our agenda and promise to Nigerians”, he further explained.

He also disclosed that the Ministers have been urged to work closely with the Permanent Secretaries to ensure accelerated and effective delivery of the policies, programmes and projects in the priority areas.

“I have also directed the Secretary to the Government of the Federation to intensify efforts at deepening the work of the Delivery Unit under his coordination towards ensuring effective delivery of Government Policies, Programmes and Projects in the coming months. It is also my expectation that progress on performance of the implementation of the 9 priority areas will be reported on a regular basis”, he added.

The president however, acknowledged the government is going through a ‘trying time’ as it revenue has fallen to almost 60 percent due to the ‘poor fortunes’ in the oil sector caused by COVID-19.

In his word, “For the government, it has been a particularly trying time, as a result of the poor fortunes of the oil sector, our revenues and foreign exchange earnings have fallen drastically. Our revenues have fallen by almost 60 percent”.

He added that despite the fall in revenue, the government had to sustain its expenditures most especially on capital projects and salaries.

Buhari also disclosed that his administration adopted a N2.3 trillion economic sustainability plan to cushion the effect of the economic slowdown.