Nwobodo’s Kinsmen Accuses Him Of Fermenting Crisis In Their Community 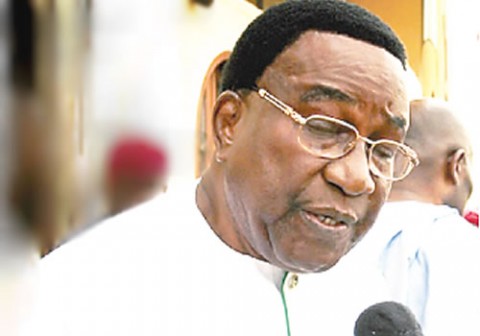 The community alleged that the one-time Minister of Youth and Sports and Elder Statesman, had used his influence in the locality to sponsor crisis in the area.

Speaking to newsmen at his country home,  in an explosive interview, President General of the community, and former Commissioner in Enugu state, Chief John Egbo, narrated how the elder statesman’s inordinate ambition to convert a community land to his personal property prompted him to dismember the town union and create confusion in the community.

Chief Egbo, explained that the community had donated a parcel of land known as Satellite land to Jupiter publishing company in the 80s to challenge Trumpet publishing company which was attacking the then Nigeria Peoples Party (NPP) government of his Excellency Governor Jim Nwobodo.

According to him, the land, was donated with the sole purpose of creating industries and to employ the people of the community while also serving the purpose of attacking the other political parties that were attacking the “interest of His Excellency and NPP.

He alleged that Jim Nwobodo who was disappointed that the leaders of the community refused to allow him claim ownership of the property started with making sure that no Ameachi person was recognized in an Ofala festival held in the community last year.

“So, the motive for making sure that we didn’t have the Ofala and making sure that no Amaechi man investitures in the Ofala was the land known as Satellite land, which Amaechi people, spearheaded by Mr Anthony Obodo Okorie now the Igwe and other prominent Amaechi men donated to Jupiter Publishing company for the interest of the community and to fight off the Trumpet of the NPN and the defence of NPP, of which he represents as the governor in the state.

“The land was not donated to any human being or to Jim as a person. It was donated to Jupiter Publishing Company and with the sole purpose that it will create employment for the community.

“So, at some point, he started gathering touts, the community touts that have bad records in the community, those who had sold community lands.

“I kept wondering. I kept asking him, His Excellency, why are you bringing all these bad people together?

“I never knew that he was trying to wage a war against this community that has done so well for him.

“At some point, he had gathered enough people. They started calling themselves Concerned Citizens of Amaechi Akwunanaw Community.

“The objective was first to remove the Igwe and second was for him to appoint a caretaker into the town union of Amaechi community.

“So that the land in question which he had sold quite a few number of plots, he can find a way to create crisis and find a way to take over the land.

He stated that Senator Nwobodo colluded with Enugu State Ministry of Chieftaincy Affairs and Rural Development to conduct an election against the constitution of the community after receiving a petition from five individuals loyal to the elder statesman.

He said that though a legitimate election had been conducted, “the ministry of rural development came and organized an electoral committee that will organise an election in Ameachi against the constitution of Amechi Akwunanaw.

“This is despite a lawsuit that we have filed against them through the permanent secretary. So what they did was actually subjudice.

“The same weekend after we had conducted our election, they came and brought the same touts which Chief Nwobodo had organized and imposed them as their own parallel town union and gave them certificates the following Monday.

“So, we had gone to court to challenge it. They now set our constitution aside in the presence of the Commissioner and began an amendment.

“From what I heard the same thing that Nwobodo was asking us to do in his private home that we refused to do as it is for his own selfish interest. Constitutional amendment has a procedure and cannot be affected in private.

“Maybe they were able to gather two or three suspended Igwe-in-council members to be present. If you come to our own election, the entire leadership of Amechi was there.

“So they began to use the instrument of government to institute a parallel town union in the community.

“We are still in court with them, So, there is a need. The court has granted our joinder in the suit and the case is coming up soon with Jim, who is saying that the land belongs to him. We will allow the court to decide our case he is not interested in dialogue with the leader but choose crises.

“The issue of parallel town union, we have decided to also go to court. But it is very important that the world hears my side of the story and that of the community.

“To also intimate everyone know that whatever happens to me that my life is being threatened.

“And I want all the good people of Enugu State to stay up so that the injustice that happened in my community does not happen in another place where someone, who is Powerful will use the instrument of government to impose a parallel town union. It is absord and very bad.

“The Chairman of Enugu South LGA believing that Sen. Nwobodo was behind his becoming Chairman began to champion the parallel town Union election with Nwobodo that now he conducts meeting of the so called parallel town union in his home and is running it as if he is the Igwe or the town union president.

“That matter will also be solved in court. Jim Nwobodo is not from my community, Amechi Awkunanaw. He is an indigene of Amechi Uno but he lives in my community.

“The interference of the commissioner and the ministry in our electoral process is unprecedented.

“They played a role in instituting their own electoral officers for the town union election which none of our executives, the Royal father of the community (Igwe), Board of  Trustees, leaders of the majority of the 19 kindreds did not attend except the chairman of the local government and the director and the Commission that perpetuated that parallel executives and the injustice.

“The people are very angry and agitated. That is why we want to tell the whole world to hear our voices because this is just the beginning. We hope that the government can intervene and withdraw that certificate from them and allow Amechi to have peace.

Chief Egbo, said he regretted that initially when the governor of the state, Rt Hon Ifeanyi Ugwuanyi intervened, Sen. Jim Nwobodo acted like he wanted peace but instead went behind to start a crisis.

“But to our surprise, while we were working with Sen Nwobodo to propagate and promote what the Governor had done for us to continue to meet and to work together as a family, Sen Nwobodo allowed some people to go and be fighting our youths who are collecting development levy for the community.

“We did everything to ensure that we obey and follow the demand of the Governor for us to live in peace.

“We did everything we are supposed to do but Sen Nwobodo dropped the ball by choosing to ferment crises in the community. And he will not relent until he sees crisis engulf the community.

Efforts by our Correspondent to get reaction of Senator Nwobodo, on the allegations hit the rock, as his mobile phone could not go through as at the time of filing this result.