[OPINION] Why Is Everybody Stealing In Nigeria? 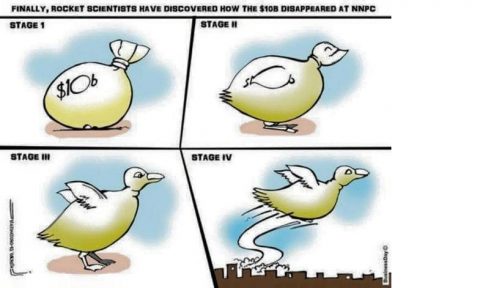 “Why is everybody stealing in Nigeria? Please, why the stealing? Here, in our country, stealing seems like an act of worship, that if you didn’t steal, you might lose the eternal bliss. Therefore, everybody strives to steal, irrespective of its implication on the populace. In Nigeria, there’s pride in stealing!

Even those who are gainfully engaged still take pride in stealing. It’s no news that civil servants are super “stealers”. They steal as much as public servants. The higher the degree, the smarter the “stealers”. Professors can steal and “pretend” to faint. When you didn’t have the heart of Akpabio, why did you steal?

Academic scholars are usually entrusted with the “destiny” of their people because of the integrity of the books they read and write, the titles they carry with their names and whatever they profess in the field of study, but they end up stealing like the politicians they condemn with big big vocabs.

A PhD thesis is an instrument of change, for having identified a problem for which it provides a theoretical solution, but in Nigeria, PhD holders, like Prof Daniel Pondei, are parts of the problem that must be resolved. But who is actually dirtier between an academic and the gentlemen of the press, another gang of “stealers”?

But why is everyone stealing?

A friend told me that poverty has no relative or friends. Nigerians would hardly identify with an extreme lack. Here, the poor is doubly humiliated – by both his status and the people around him. We celebrate riches and the affluent. Thus, the impoverished poor succumbs to his folly when he becomes so desperate for a quick breakthrough!”

(The above is from a post that went viral on social media recently; unfortunately, I do not know the author, so as to acknowledge him/her, but the readers of this article have probably come across the post. So, apologies if the author is not duly acknowledged or referenced)

It is obvious that there are so many reasons and circumstances to the issue of stealing and looting in Nigeria, and we tend to see it differently and in diverse opinions. But one thing is we are all agreed that stealing and looting and other forms of corruption exist and has become endemic in our society, greatly stunting our economic, technological and moral growths and developments, corroded public and international trust in the country, and impoverished the people of this country.

“Corruption is the single greatest obstacle preventing Nigeria from achieving its enormous potential. It drains billions of dollars a year from the country’s economy, stymies development, and weakens the social contract between the government and its people. Nigerians view their country as one of the world’s most corrupt and struggle daily to cope with the effects. Yet few analytical tools exist for examining the full range and complexity of corruption in Africa’s largest economy and most populous country”. SUMMARY from the book “A NEW TAXONOMY FOR CORRUPTION IN NIGERIA”, By Matthew T. Page

EVERYBODY is stealing because NOBODY is looking after the interest of ANYBODY. People without food for days might decide to either end life through suicide or go out and steal to keep the body together. Once they meet with little or no resistance, they turn stealing to profession. Students, male and female steal, cheat, and sell their bodies in order to pass through higher institutions.

Even the people who are blaming the system are also waiting for their slight opportunity to steal the public funds. I think the cleansing need to start from the top to the bottom and we need go orientation, because here in Nigeria, we don’t celebrate hard working people. We don’t celebrate integrity, but revere mediocrity and we like to cut corners to quickly get what we want in detriment of others.

A change of heart /circumcised heart is what we need, that’s my humble advice.

What’s happening now in this country is the death of home morals, because the homes have lost their God-given roles and all kinds of vicious human dogs are now unleashed into our animal jungle called Nigeria with all kinds of vicious corruption venom. How do you expect a society that glorifies people of shady characters and we expect young upcoming ones not to emulate such characters in our society? What we need in this country is the China way of tackling corruption by death penalty. Some years back I can recollect that when death penalty was imposed as penalty for drug trafficking in Nigeria and with the execution of some traffickers, the trafficking trade had a change. If we refuse to face corruption with all what it deserved, corruption will destroy all the fabrics of our society called Nigeria.

1. Because stealing is in human nature. 2. Because no one believes in Nigeria, as it is a contraption and not a nation. 3. Because of 2 above, everyone thinks it will end soon, so prepare yourself!!!!

People who have been found to have stolen are never punished so people assume that stealing pays. Therefore, it has become the pastime of people to accumulate private capital.

Interesting responses to the questions why Nigerians have the propensity to steal or are predisposed to stealing. Why do Nigerians steal? Why not? If we explore why not, possible answers or scenarios will emerge. But first we must explore the What, the When, the Who, and then the How.

I stopped because l wanted to read more responses to understand the thinking process of the responders. None have moved from concept to the root cause of stealing in Nigeria. Many have attributed it to poverty, human nature, bad government, human psychosis etc. To understand my point, we should look at our respective homes, the structure and the elements within the home to see we steal. This is the micro explanation, then we can now seek to large reasons why we steal. Stealing is a choice. It is deliberate and purposeful. The solution lies in improving: 1. The Institutions (rule of law and the instrument of governance), 2. The Culture and Sub Culture of the different units of society and 3. The Individual herself/himself (re-examination of self within the context of the larger cosmos and humanity. The three must have a core in order for us to control the propensity or the culture of stealing in Nigeria.

This why stealing of public money persist in Nigeria. A man who should been punished and thereafter in hiding due to public shame arising from his punishment is now being rewarded. There is no lesson to learn by others who harbour such tendencies so you will find that tomorrow you will hear of a case of stealing by a governor that will make the Ibori’s case insignificant. Ibori’s case is that of rewarding corruption.

Corruption is the change from moral to immoral standard of behaviour. So, we become corrupt when we have lost our morality.

Also, if our own man is appointed or elected to a position, we belabour him with our needs and multiple demands, and if he failed to do it, we run him down. The fool steals from the corporate cover to meet our demands and bites his finger at the end, as he steps into the jail or bargains for freedom with all he has acquired in life.

People steal in Nigeria because there are no consequences. When consequences start to matter, people will sit up. All that talk of Nigeria wanting to break is just looking for excuses. Stealing has been occurring long before the threats of splitting. 1. Because most Nigerians are very religious without having the fear of God. 2. Because most Nigerians do not have the grace of contentment. 3. Because stealing of public funds and false life styles are now rewarded with Awards by the Nigerian Society.

The answer is because everyone gets away with it, to the extent that they are even rewarded with government appointments.

One of the major reasons for the widespread public fund looting is that most people who have access to it believe that if they do not steal it, the next person will do with a guaranteed impunity which is sadly true.

Because nobody does a psychiatrist test for people before they get into office. The issue I suspect is hunger mentality. The intractable, depravity driven urge to acquire humongous amounts to ‘secure’ tomorrow or the rainy day. Let me give an example of hunger mentality; 05:30 hours. Five people are at the bus stop. An empty 56-seater bus arrives at the bus stop. Empty bus, starting the daily runs. Five people crowd themselves into the bus, in a near stampede!