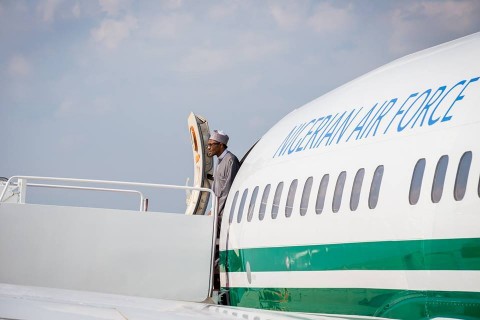 By Tajudeen Balogun, Head, African Examiner, Nigeria Bureau – Historically, Nigerians are not strange to the new President traveling abroad (either on invitation or request) for smooth bilateral socio-economic and political relationship or to seek for Direct Foreign Investment (DFI). On record, the former President Olusegun Obasanjo first four years in office (1999-2003) unarguably has no rival with respect to his  (Obasanjo’s) seemingly ‘endless’ junketing around the globe, mostly hinged on scouting for huge external investment in the country.  And despite the slow pace of work during his two years in office (out of four), late President Umaru Musa Yar’ Adua, regardless of his health challenges, news of government’s policies aspiring to encourage DFI as well as top government officials traveling abroad for the same, were rife and never ceased to feature prominently in the mass media reports. Interestingly, the same trend was turned to the “Unique Selling Proposition” (USP) – surprisingly became a tool to measure and propagate how “big and healthy” the country economy stood, by the immediate past administration of President Goodluck Jonathan.

Therefore, it never came as a surprise, when news of  the just concluded four-day working visit of President Muhammadu Buhari to his United States (US) President Barrack Obama counterpart, as well as tour of the country was made public last month – June. Painfully, the strength always applied, resources budgeted for and media hypes accorded the previous foreign trips by the former administrations fell short of due and desirable expectations and results by Nigerians from the trips.

In effect, it is the hope of not a few Nigerians that the latest Buhari’s US trip would not end up in the same way – “talk show” or a mere ‘pastime’ like former administrations and President Buhari’s successors.

However, Mr. President caught my attention specially, with certain statements he made while the trip lasted. For instance, while speaking at the US peace Institute, President Buhari for the first time, since his assumption to office May 29, exposed the very worrisome level of corruption which involved top officials of the last administration. The President hinted that the records of the sharp practices with him and his administration were charging and “mind boggling”!

President Buhari gave an insight to his allegation, when opened up at the institute and said some of the officials were found wanting – diverting tonnes of refined petroleum products on the high sea to unknown destinations, yet claimed arrival to Nigerian shores and received payment on them! What a scam! What a national tragedy!

These are obvious facts to many Nigerians – who have since expected these revelations (confirmation) and most importantly moves to commence thorough investigations, prosecution, refund and due punishment to the culprits as he did vow to do at the Institute.

The questions which bother many minds are: why did Mr. President choose to make his first (and possibly official) outburst on this key National issue on foreign land? Is the action accidental, planned or deliberate? Is there any spectacular point(s) to gain or score in making such damning revelations outside Nigeria? Theses posers are not aimed at insinuating anything; yet, the choice of President Buhari to first open up on issues already in the public domain, (since expected the exposition) was a critical development, therefore calls for questions – specifically for clarifications as well as set the records straight, once and for all!

The Presidency; information managers of President Buhari and by extension, his party, have roles to play here. These stakeholders should not hesitate to oblige the discerning minded individuals clear and objective replies, for public sensitization and trust. The earlier this is done, the better.

Again, during his four-day trip, President Buhari’s another statement of interest to me was his response, perhaps to one of the questions asked at the TownHall meeting he had with the US Nigerian community. The President replied: ‘If you are living fine here, please hang on and don’t bother to make it back to Nigeria, where the government is aspiring to be prudent – downsize the NEC from 42 to 19’.

Without mincing words, the sincerity of purpose that might have prompted this very instructive reply as far as President Buhari’s standard is concerned is not really in doubt. Yet, is it not ironical, when a government which still struggling within and beyond to breathe a new life into the various sectors of the country; corners more investments; aspires to re-orientate her populace with respect to diligence and honesty, to discourage her Nationals in diasporas to stay back? What about those already planning to return home with a view to add values – creating empowerment opportunities via skill acquisitions; developing SMEs among others? What impression is Mr. President is giving those fall under this category?

And the same government not only has promised millions of jobs to the teeming unemployed populace, but has since sustained the crusade that the private sectors must join hands in productive engagement of people and wealth creation! So where is the link in President Buhari’s submission; the massive advocacy to take the unemployed out of the streets with huge and persistent investments and participation by private individuals? Is President Buhari on this statement, not speaking against one of the goals of his administration and common aspiration of Nigerians?

May be, explanations from the Presidency Mr. President’s Communication and strategy hawks might be of immense assistance in this regards. In other words, President Buhari’s ‘cautious advice’ requires comprehensive public clarifications, to avoid misconception.

Now that another ‘usual’ visit has come and gone, Nigerians are expectant of how and when the trip will bring into bear, many socio, economic political and in particular security benefits expectedly inherent in it, back home. For now, the major security task before Buhari’s government is the Boko Haram insurgency in the North Eastern part of the country. Fortunately, Obama-led US government has since expressed willingness to assist Nigeria, in dealing and stamping out the rampaging terrorists. Recall, the US recently announced donation of $5 Million to support the anti-terrorists’ operations.

Expectedly, talks on war against insurgents also featured in President Buhari’s audience with Obama. Therefore, the expectation of the public if the visit must be commended and adjudged to be so relevant to the Nigerian common course and aspiration, is that the anti-terrorists’ war must make a serious and far reaching headway, especially when the incoming Nigeria-led Multinational Joint Task Force (MNJTF) launches its onslaught fully, hopefully next month, as promised.

Nigerians as stated earlier, have witnessed many similar foreign trips, which Mr. President just concluded, but with little or no much impacts; therefore are not really keen, rather their interest bothers on any effort within and outside the country that will deliver immediate and lasting solutions to myriad of challenges facing common Nigerians.

Indeed, I have no doubt that the key actors in the present government, as well as the ruling party in general, are so smart to the extent of appreciating the fact that Nigerians are equally versatile and intelligent people. Therefore, I expect this government to know that, so many Nigerians realize the fact that there is no ‘prompted’  or organized diplomatic relationship that lacks ‘a self-seeking’ and clear cut agenda. In other words, Mr. President and his party should be faced with the fact that his recent host and his country, have self set agenda, which they determine to guide and protect by all means.

This is a very key angle. I mean the President should be able to strike a balance – between the foreign and local agenda as well as interest. Where the former runs contrary to the latter, care must be taken not to gullibly fall victim, hence, the needed efforts to modify such (if possible) or tactically opt out. This is very key and important; so as to ensure this government does not derail, lose trust and confidence reposed in it by millions of Nigerians who voted President Buhari and the APC for an independent and prosperous country. This is the thinking and perception of an average Nigerian on the street as far as the recent trip and others to come in future are concerned.

Gladly, issue on gay at least, to the public knowledge, contrary to the fear expressed by many Nigerians, did not feature during Buhari’s US journey. Personally, I was shocked about the level of stress hazard and deafening calls and stern warning to Mr. President not to accept proposal on legalizing gay in the country. Why I was taken aback about the concern of many Nigerians on this topic at the instance of Buhari-Obama meeting, is just about the President’s pedigree and his African background. I was confident Buhari would never give in, to such an eerie advance.

Anyway, glad to say the topic never featured at least for now. However, if anyone from any quarter attempts to push the same agenda, the disdain already expressed against it is enough for a reasonable government, not to even imagined, let alone proposing and letting it to stand.

Finally, beyond the perceived fear and differences, on many aspects of his trip, it is essential President Buhari is welcome back home. So, as he settles down on his job and returns to his desk, Nigerians and the entire world are watching and expecting how those who have dragged down this country for long would be duly and constitutionally brought to book. They are expecting when and how the gains of the US trip which is part of the four years the present administration has to spend in power will manifest into a life-long fortunes, without delay. This is a must; a mark that will make unique difference from the previous similar trips and the only condition many supporters of the ruling party and Nigerians in general, will take subsequent journeys as well as reasons given for them, very seriously.

Protest in Nigerian Wednesday took another twist, when the candidates seeking admission into the University of Lagos (UNILAG) and their parents, took to the streets, stormed and laid siege at the entrance of the citadel, Akoka, to express their exception to the decision by both the Joint Admission and Matriculation Board (JAMB) and the school to allegedly shortchange and deny them (candidates) admission.

So far, the UNILAG authorities and JAMB have rationalized and justified the reasons why they had to jerk up the cut-off marks (for admission into the school) to 250 as against 180 announced by the examination body and despite that a whole lot of the over 30,000 candidates jostling for about 9,000 available space scored up to 200 in their UTME, many of the parents, guardians and candidates did not hold the duo (UNILAG and JAMB) in confidence. The crisis of confidence, despite explanations to avoid making them forfeiting admission and waste the incoming academic session, also informed why the candidates never appreciated their re-posting, to other institutions, for the test and subsequent admission.

This is the sorry and disheartening level the country has found itself. Giving the antecedent of similar situations (employment and political appointment), could anyone blame the candidates or their parents? As for me, not really; ‘once bitten twice shy’, so the saying goes. The situation like this is most likely to remain with us, as long as leaders continue to use their offices to corner common wealth to benefit only themselves and cronies. Until our leaders’ ‘Yes is confirmed to be yes and No is no’, the challenge of trust as played out Wednesday at UNILAG will not abate in our national life.

The present administration among other tasks before it, must work on mutual trust between it and the governed. This is very significant as it determines the success or failure of a government. President Buhari, should please take good note of this crucial aspect for posterity!