Bloodshed: Over 600 People Die During 2019 Elections in Nigeria 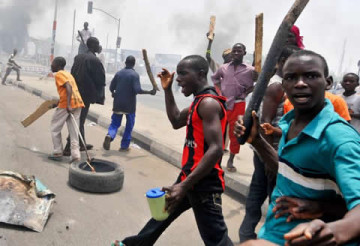 (AFRICAN EXAMINER) – Stakeholders from various walks of life have condemned in strong terms the high rate of political violence that characterised the 2019 general elections which claimed a total of about 600 lives  in parts of Nigeria, describing it as “most unfortunate.”

They stated this weekend in Enugu, South- East Nigeria, during a two – day workshop organized by SBM Intelligence and Gatefield Nigeria Limited, in collaboration with the Open Society Initiative for West Africa, OSIWA to undertake a review of the security challenges arising from the elections.

Various speakers at the forum had blamed the rising cases of violence on politicians, their supporters, as well as security operatives.

Head of Research, SBM Intelligence, Cheta Nwanze, who kicked off the discussion, lamented the high scale violence which trailed the elections, in parts of the country .

The group in its report presented to the stakeholders,  disclosed that “thuggery, influenced by politicians and political parties, protest, election fraud, violence in battleground areas and vote buying impacted on the outcome of the elections.

It added that: “Same can be said for terrorism, especially in the North-eastern States of Yobe and Borno, and the activities of security agencies in some contentious States.”

While blaming low turnout of voters partly on the fatal clashes recorded in the months leading to the elections, SMB said “there were 161 verified incidents, which resulted in 626 deaths within the period between 16 November, 2018, the official start of the campaigning and the day of elections.”

It concluded that by voters’ admission, “the 2019 general elections in Nigeria were greatly flawed. Some of the blame adduced to INEC’s shoddy preparation for the elections, some electoral officers’ willingness to participate in fraud and politicians’ lack of sportsmanship.”

Addressing the gathering, the General officer Commanding GOC, 82 Division of the Nigerian Army Enugu, Maj.-Gen. Abubakar Maikobi, said the military were highly professional during the elections, even at the face of provocation by some overzealous politicians and their supporters.

He called for an attitudinal change on the part of the politicians, who should strive to see political office as a call for service and not a do-or-die affair.

In his remark, the Enugu State Police Commissioner, Balarabe Sulieman, attributed the peaceful elections in Enugu State to synergy among the various security agencies.

He said “based on the training we received prior to the elections, all the security operatives involved in the exercise knew their job and it was carried out with utmost professionalism devoid of bias. There was a complete synergy among all the security agencies in the State and that is why we had a violence-free exercise in Enugu State.”

Presenting  a paper, at the Forum, entitled “Root Causes of Electoral Violence during the 2019 Elections”, Dr. Maurice Ogbonnaya, of  the National Institute for Policy and Strategic Studies, NIPPS Kuru Jos, Plateau state, said with the wild scale violence and manipulations, “young people are losing hope in the election system. They do not believe that the election represents the voice of the people.”

Ogbonnaya stressed that  “elections ought not to cost the life of any Nigerian, even if it is one person, it is a loss too many.”

Also speaking, Dr. Freedom Onuoha of the University of Nigeria, Nsukka, UNN, corroborated the submission of other speakers, blaming the political tensions on the over-concentration of power and resources at the centre.

Onuoha, a lecturer at the Political Science Department, said power and resources should be decentralized, adding that “security chiefs would always do the bidding of the man at the helm of affairs in other to not just retain their positions but attain higher ranks.

In his presentation, the  Anambra state Resident Electoral Commissioner, REC, Dr. Nkwachukwu Orji, had identified major challenges during the elections to include “insufficient assessment of trouble spots; unavailability of deployment information; insufficient number of security agencies; poor response to situations, late of deployment of senior officers, among others.

All the security heads who spoke at the ceremony, had absorbed their respective organizations, of any wrong doing during polls, insisting that their men deplored during the exercise lived up to expectation, especially the military.

Meanwhile, a communique is being expected at the end of the 2-day Forum.