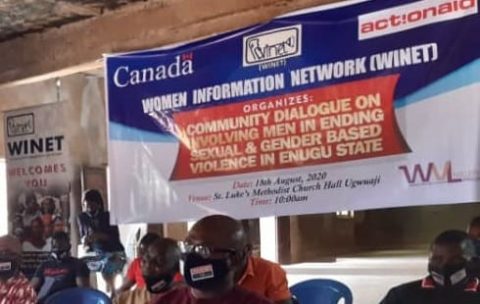 (AFRICAN EXAMINER) – Worried by the high rate of rape, as well as other sexual and gender based violence in the contemporary society, a nongovernmental organization (NGO) Women Information Network (WINET), and  a renowned Social Reformer, Mr. Larry Oguego, have  advised Communities in Enugu State, South- East Nigeria, to remove all forms of barriers in reporting such ungodly act to the law enforcement agencies.

Oguego, who believes that respect for human rights creates an enabling environment for national transformation, spoke Tuesday during a Community Dialogue on Involving Men and Boys in Ending Sexual and Gender Based Violence (SGBV) put together  by (WINET) at Ugwuaji Awkunanaw, Community, in  Enugu South Local government area of Enugu State.

He explained that some communities had bye-laws that did not permit members to take one another to court or report a community member to the police, noting that such practices  are impediments to seeking justice by victims of crime such as rape that require immediate provision of evidence to be established by the police and hospital.

Mr. Oguego, however, advised citizens to desist from shielding their relations who have committed crimes from prosecution as this type of practice helps to embolden criminals to continue committing crimes in the society.

He, therefore, opined that suspects of rape, wife battery, sexual abuse and other forms of sexual and gender-based violence should be apprehended and handed over to law enforcement agencies for prosecution.

On what men could do to prevent Sexual and Gender Based Violence (SGBV) in the society, he advised Community and town unions to train men and boys to respect women and girls and train the girl-child to be careful and discerning in the society.

In his remark at the event,  President-General of Ugwuaji Awkunanaw, Chief Nkwuo Friday Reuben, had thanked Women Information Network (WINET) for initiating the dialogue to involve men in ending Sexual and Gender Based Violence in the society promising that that his office and the Chairmen of the villages will work together to disseminate information from the dialogue to other males in the community.

The Community Leader regretted that sometimes victims of rape shy away from reporting because of some of the embarrassing way in which they are cross examined to determine the case.

Earlier, in her speech, Executive Director of (WINET) Mrs. Miriam Menkiti, explained  that following the increasing wave of sexual and gender based violence in the society, her organization was leading a campaign to involve men and boys in ending the scourge in the society.

Mrs. Menkiti added that WINET was engaging in sustained enlightenment campaign to end sexual and gender-based violence in Enugu State, under the Women’s Voice and Leadership (WVL) Nigeria project, fully supported by ActionAid Nigeria and funded by Global Affairs Canada.

She stated that the project is being executed with a view to achieving increased enjoyment of human rights by women and girls and the advancement of gender equality in Nigeria.