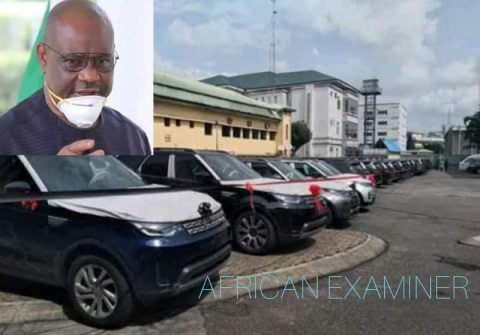 According to reports, this gesture of the governor was in fulfillment of the promise he made to judges to enhance effective delivery of Justice in the state.

However, this supposedly kind gesture of the governor has now become the centre of controversy on Twitter as some users condemned him for not buying from Innonson and influencing the judiciary while some praised him for keeping to his promise.

African Examiner captures some of the tweets:

@SERAPNigeria, @EiENigeria, @AdeolaFayehun, @DrDamages and others are not making videos. Let it be Gov SanwoOlu, Gov Abiodun or Gov Elrufai…They will even copy hellfire after copying all embassies and consulate. “

Cmonionline@cmonionline writes: “writes: “Politics just like many things in life has a lot to do with perception..Wike wasn’t caught on camera stuffing dollars into his agbada so it is what it is.

“OSCAR@Iam_Oscar1 writes: “Governor Wike bought range Rovers for judges and Twitter ng is not dragging him LoL If this same was done by Ganduje ern.”

Adebodun FaKayode@drdebodun writes: “So our channels TV crew are in the lion’s den today. How can they ask him the inconvenient and hard questions? Well, if @OfficialAPCNg allows Emperor Wike to ‘thug’ his way to victory in the Edo elections that is their business.”

A ¦ W ¦ R ¦ S ¦ F@isaacwalex writes: “Wike buys cars for House of Assembly members and judges and everyone is shinning teeth saying he’s recognizing their importance. How do the judges and lawmakers not see the conflict of interest?”

Ionwannatalkboutit@Ionwannatalkbo1 writes: “stan and kyle headcannon be wike they fuckin but think thats just what best bros do LOL maybe some internalized homophobia sprinkled in that dynamic.”

LEGAL ORACLE @Victornkemjika writes: “Gov Wike didn’t give them Cars, the Rivers state Government of which the Judiciary is an Arm received Cars to help them enhance there work, it’s a statutory entitlement!!! If you have a judge as a relative you will know how hard those guys work, we don’t thank them enough!!!”

Abubakar A Aliyu@AbubakarAAliyu7 writes: “As gov Wike bought RANGE ROVERS for the judiciary in his state and refused to patronized INNOSON MOTOR wailers see nothing wrong with that, But if Buhari did the something, wailers will start by saying he buy judiciary and then say he killed INNOSON MOTOR.”

Magdalene Eyoma@MagdaEyoma writes: “Wike is the governor of a state while Buhari is the president of a country. Wike is under no obligation to buy Innoson but Buhari is. He’s the Chief Marketer of Nigeria and should ALWAYS market home grown products. Once it starts from the top, it will trickle down.”

Akanbi ola@akanbiola1 writes: “One Million youths Movt for Wike, don’t worry you Pples’ Corolla is on the way, patapata Keke napep go reach una. Since that’s the best advice he could get in this pandemic era, no empowerment for the Youths, no job employment opportunity unless u fit do taskforce. Meka ooooooo.”

Adetutu Balogun, MBA@Tutsy22 writes: “Wike suspends all taxes across the State for SME, including shop owners & hairdressers for the yr 2020. Also suspended are all LG taxes & levies with the exception of tenement levy. He reportedly made this move in a bid to cushion the impact of COVID19 in d state.”

Inibehe Effiong@InibeheEffiong writes: “This is rubbish. Governor Wike has no respect for judicial independence. I have a problem with this report. A governor is not in a position to donate “gifts” to judges. It is nonsensical. If judges need vehicles, the Judicial Service Commission is supposed to provide same.”