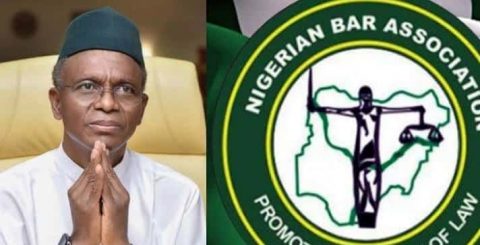 (AFRICAN EXAMINER) – As the debates on who to speak in the Nigeria Bar Association, 2020 Virtual Annual General Conference (AGC) continue to elicit controversy,  Nigerians  on social media are having a filled day discussing over the exclusion of Governor El-Rufai as one of the speakers in the event.

Recall that the NBA had initially invited the Kaduna governor, which has generated lots of backlash as many lawyers protested that El-Rufai was notorious for disobeying court orders and inviting him to speak in an event for lawyers is not ideal.

However, with the exclusion of the governor, the debate about who speaks in the conference has not ended as lots of Nigerians commended the NBA for a job well done while some derided the group for the inclusion of former president, Olusegun Obasanjo and Rivers State governor, Nyesom Wike, as both of them are not “perfect examples” of the law.

African Examiner captures some of their tweets below:

SEGA L’éveilleur®@segalink writes: “sat back and applauded the President while denigrating the constitution by subjugating the rule of law for an ambiguous National (Regime) security. We are yet to recover from that irresponsibility yet they want El-Rufai to speak at the NBA Conference? HELL NO! ‘

Nafeeu @nafeezi writes: “Nasiru El-Rufai is still detaining the leader of the Shi’ites, El-Zakzaky, against a court order that granted him bail But the NBA wants him to be a speaker at their conference Those who hold the court of law in contempt are having their voices venerated by lawyers Crude irony.”

rich_@motivexray writes: “I am really proud of all the lawyers who lent their voices in pushing @elrufaioff the list of participants at @NBA virtual conference. Tyranny cannot prevail.”

Alawode-James, OlaJumoke@oluwaloninyo writes: “Not all Protests have to be on the streets. I am extremely proud of Lawyers, who allowed their opinions be known online and withdrew attendance at the NBA conference. Nigeria heard you! #Lifefull”

Qaasim Odedeji@QOdedeji writes: “El Rufai must be allowed to speak at NBA Conference. We are lawyers and must listen to all parties https://help.twitter.com/safety-and-security/data-through-partnerships…”

@elrufai as a key speaker? pls every lawyer under NBA must give us the answer.”

Lamo@lamidex2 writes: “@elrufai won’t be speaking at the NBA conference. Every concerned Nigerians should call this Ma out. Sir, since you are incapable of proving security for the people of your state, it means you are not worthy to govern that state. Kindly resign.”

Duke@Duke_CN writes: “Inviting @elrufai to speak at an NBA conference is like inviting Adolf Hitler to sing lullabies to Jewish babies.”

Umar Sa’ad Hassan@Alaye_100 writes: “The NBA Conference has turned into a money making & client appeasing venture. AB Mahmoud is Dangote’s lawyer & he invited Dangote’s daughter of all people to come & speak..Wike was going to sponsor this year’s before it became online. Now they are inviting El Rufai. Shameless lot.”

Lugard Tare-Otu@Lugard_Tareotu writes: “Governor @elrufai has no business addressing lawyers at the @NigBarAssoc conference. As lawyers, it is our duty to uphold the rule of law. Courts have found that Elrufai’s Government has illegally arrested & incarcerated people. I hereby withdraw my attendance from the Conference.”

Abutu GCFR.@abutugcfr writes: “if you will allow @elrufai to speak at NBA conference then, I don’t wouldn’t be part of such a conference. Good luck to you all.”

BKNY (Buka)@Buka_Inc writes: “Elrufai has NO BUSINESS in any NBA Conference. After you finish crying, drink water. See you later.”

CAPTAIN@ThisIsPOU writes: “Oh. They have turned their anger on Wike, a lawyer who has every right to not only attend the NBA Conference but also speak? Just wait, they are going somewhere. They will soon turn it to Igbo bashing. That’s their end game. And Nedu will lead the attack. Just wait & watch.”

Olukayode@kayaluko writes: “That NBA Conference should have gone ahead including all the invitees so that questions can be asked and all doubts cleared.”

Olayemi @olayemi_123 writes: “So Gov Wike is one of the keynote speakers yet it’s El Rufai they protested against? Governor Wike can speak at NBA conference but Governor El Rufai can’t. The actions of the NBA is not only ill advised, but condemnable. Bloody hypocrites everywhere!”